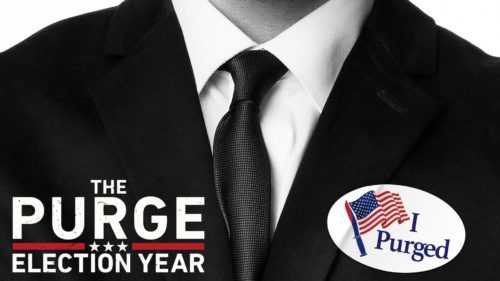 Following the events of the previous film, Leo Barnes is now working as head of security for Senator Charlie Roan. Roan is now running candidate for President along with Minister Edwidge Owens. Roan seeks to end the annual Purge and Owens seeks to make it stronger. Seeing Roan as trouble by the new Founding Fathers, she becomes a target on Purge night.

When the original Purge came out, I was pretty excited to see it due to the cool concept, unfortunately it was a massively let down that didnâ€™t make proper use of the concept, and instead gave us a boring home invasion story with boring and unlikable characters. When the second film came along, it was massively better by getting out in the world and giving stronger and more likable characters, as well as further insight of the brutality of the Purge. With this film, it conveniently comes out the year of our own election. In turn, the two runners for the election in the film basically reflect Trump and Clinton. Itâ€™s hard not to notice that similarities and political propaganda that basically beats you over the head. Nonetheless, it still works in the themes it tries to represent and manages to work it into an entertaining story. The odd thing with this film is that it hardly feels like a horror film, with the exception of a few (and for the most part effective) jump scares, it plays out much more as an action film. Anarchy had a combo of both horror and action, the original, while the worst one, was definitely horror. So it seems odd that as the films go on, they seems to distance themselves from the horror genre. Right from the beginning, the film does a fine job of keeping you hooked through the whole film. We are given characters to root for, and enough insight on these characters to actually know them. This is one film where you wonâ€™t see the hashtag â€œPurge So Whiteâ€, when in fact there are more characters of other races as lead characters than white Americans. While the characters were likable, I grew tired of the character Leo. Understandably, given his background heâ€™s all about being serious and not joking around, but heâ€™s do damn serious the entire time that he doesnâ€™t have a rounded enough personality. That said, he still is likable enough for a heroic character. One thing I also loved about this film is that it has great humorous moments that were used at the perfect points in the story. And it has to be said that it has a solid score that really sets the tone for its thrilling sequences.

The whole cast does a fine job, but the two actors who stood out the most to me were Elizabeth Mitchell and Mykelti Williamson. Mitchell plays Senator Roan, initially I thought I was going to be annoyed by her considering she was a political person and all for doing good, but in the long run she came off as a real person and not as moralistic as I expected. Though I wish she was given more emotional moments to work with and some ass kicking scenes, I feel Mitchell would have owned it. Williamson (most famous for playing Bubba in Forrest Gump) hands down was the best in the film. He gets to kick plenty off ass, and has much of the best dialogue (funny and serious) moments. In fact, heâ€™s the character you root for the most with the determination and integrity Willamson gives off.

The Purge: Election Year is a sequel you would think would be nothing but boring political propaganda, and while it is political, the script is well-written enough to make it work for a thrilling and action packed film with solid performances and likable characters.