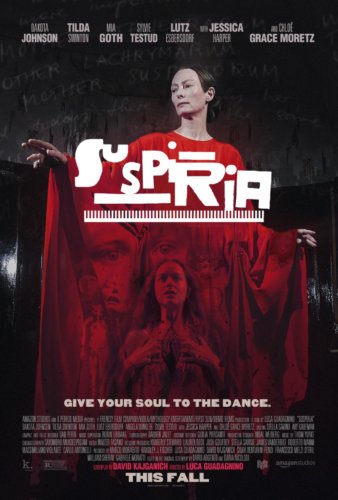 In this remake of the 1977 cult classic, a young aspiring dancer attends a dance academy where sinister events are occurring behind closed doors.

Dario Argentoâ€™s classic is known for its amazing score, cinematography, and great gore, Luca Guadagninoâ€™s remake takes elements of the original story and tells its own tale, and it succeeds. This remake relies entirely on slow-burn suspense and minimal gore (at least to me it was minimal) to keep the viewer engaged. For a horror films thatâ€™s two and half hours, I was never bored. There are moments sprinkled out, along with the score, that keep you hooked on trying to see what happens next. Sure there are moments involving the psychologist that I thought were dwelled on too much, and yeah it does come into play in one plot-point, but it wasnâ€™t an aspect I cared much about. There are also some background events that brought in involving a terrorist group that didnâ€™t feel necessary for me either. The dance sequences are fantastic and so well-choreographed, Dakota Johnson nails all of this, as do the supporting cast. The witches in this film are pretty damn evil and they make you feel uneasy. All of the slow-burn suspense builds up to one hell of a great and intense final act with a great twist I didnâ€™t see coming, and one hell of a great blood bath sequence. Gudagninoâ€™s direction is solid and is very reminiscent to how things were captured in his previous film Call Me By Your Name, and the score here doesnâ€™t reach the level of the original film, but for this version of the film it works.

My only issues come from a not terrible, but kind of unnecessary Epilogue sequence, and there are some details that arenâ€™t entirely laid out or some things not made entirely clear. Maybe this is intentional and will saved for the sequel? Who knows. And while Dakota Johnson did a serviceable job with what she had, her character Suzy is pretty bland and boring throughout a majority of the film. I was hoping she was would have been able to express a stronger performance in this film so she can eventually shed her Fifty Shades image and the talented actress she actually is. As mentioned though, she does master the physical performance of her role. Tilda Swinton is great as Madame Blanc as well as the male psychologist. And while Mia Goth starts with not much to do, her character builds into an extremely interesting characters and offers the stronger performance after Swinton.

This is definitely one of the best remakes ever made in my opinion, I didnâ€™t absolutely love it, but I do find it a pretty great film and paid great respect to the original film while providing itâ€™s own version.

PS, there is an end credit scene, very brief, but could ultimately be important.