10. Four girls in the car-Death Proof
Excellent FX effects make this car crash scene one to remember. Extremely bloody and over-the-top with no CGI use whatsoever, this scene is a testament to the 70’s and 80’s drive in classics.

9. Girl beaten with sleeping bag-Friday the 13th Part 7: New Blood
Probably the most memorable death from the entire “Friday the 13th” series. One hit against the tree in the sleeping bag and the girl death by the new “Zombie” Jason. A hell of a lot of fun and the only case I can think of in recent memory where the edited version works better than the unedited one.

8.
Tina-Slashed Open, Falls from Ceiling-Nightmare on Elm Street
The great misdirect. Throughout the first twenty minutes of “Elm Street”, Craven presents Tina as the ultimate final girl. It is with shock that she is killed off at the end of the first act. By this point the audience as no idea what to expect and knows they are no longer watching a “traditional” horror movie.

7.
Waterbed Death-Pieces (starts at 2:58)
Blood gushes out of a girl who is terrorized with a large butcher knife on a bed. Say what you want about “Pieces”, the acting might be terrible, the dubbing atrocious, and the direction lacking but the deaths are some kind of amazing. More gore than you are likely to see from most horror movies of the 80’s.
http://www.youtube.com/watch?v=1iwullPIrJY

6.
Nancy-Nightmare on Elm Street 3: Dream Warriors
The ultimate punch-in-the-stomach. How could they kill off Nancy? Nancy is one of the greatest Final Girls in the history of horror cinema and when she is killed by Freddy at the end of Nightmare 3, you feel it…hard. Used to make me cry as a child and still puts a lump in my throat.

5.
Kids on Raft-The Burning
Some great special effects highlight a classic scene from another 80’s slasher. Excellent editing and score give this scene a killer edge. Plus, c’mon, you gotta love a guy with garden shears as a weapon! 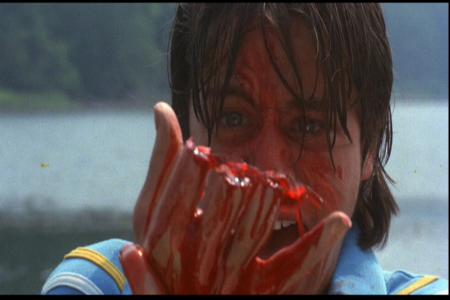 4.
Tatum-Garage Door-Scream
One of the most creative death scenes of the 1990’s. Very funny, very clever, and very scary. You are trapped in a garage with a killer. What do you DO? Well, ultimately Tatum makes the wrong decision but you can’t blame a girl for trying.

3.Jennifer-TV Death-A Nightmare on Elm St 3: Dream Warriors
Freddy uses Jennifer’s “dream” of being on television to kill her in her dream. The Fx in this scene is just superb and Freddy’s “Welcome to Primetime, Bitch” line gets a laugh out of me every single time.

2.Old Lady-Basketball-Deadly Friend
Hilariously gratuitous gore scene (see above pic) in the middle of a fairly serious horror drama. This movie is all sorts of weird and this death scene is just about the tip of the strangeness. I can’t say this death really fits in with the rest of the movie but at least it’s fun.

1.
Debbie-Turned Into a Cockroach-A Nightmare on Elm St 4: Dream Master
Yuck! This is the death that used to give me nightmares as a child. I am not a fan of bugs so just imagining turning into a bug just gives me the willies. Freddy gives some of the best death scenes ever and this one truly is the best of the best.