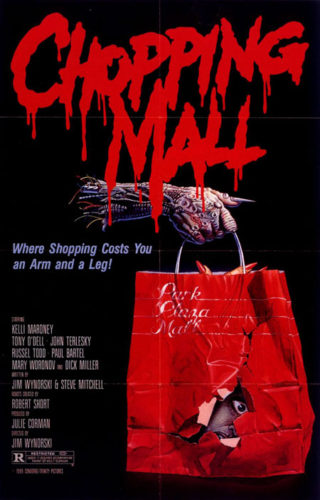 A group of teenagers working in a mall decide to get together for a all night party of their lives. When the mall goes on lock down before they are able to get out, the robot security system (seriously? in a mall?) activates after a slight malfunction (is there anything that electricity couldn’t do in the 80’s?) and they go on a killing spree. One by one the three robots try to rid the mall of the teenage intruders. Chaos ensues and few will leave this party alive.

There you have the premise for “Chopping Mall”, one of the best named slashers of the 80’s, and one of the best premises too. “Chopping Mall” is the kind of movie that couldn’t have been made in any time except the 1980’s. Killer robot security guards taking over a mall by night? Sound like a good time? It does to me. The beauty of a cheesy horror movie like “Chopping Mall” is that you will either buy into this wacky, overblown premise or you won’t. Chances are that if you are in the mood to rent or buy a movie called “Chopping Mall”, you will probably have a good time with it. The film is a camp delight from beginning to end with just enough laughs and gore to make the whole thing watchable. Is this great cinema? Hell no. Can you do a lot worse than this little gem of a slasher flick? You bet.

Oh and I neglected to tell you dear readers the very best part of this film….it’s 78 minutes long. That’s right. It gets in, does its damage, and gets the job done before the audience can even come to their senses as to what hit them. And, let’s be honest, who can hate a film with dialogue like “I’m just not used to be chased around a mall in the middle of the night by killer robots.” I sure as hell can’t.