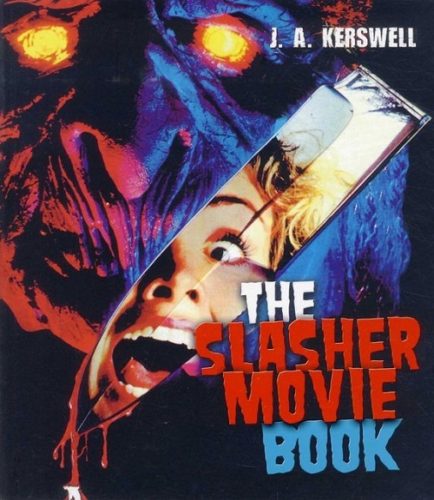 Justin has operated one of the best online slasher resources, the epic Hysteria Lives, for the last 15 years, he is a trove of slasher knowledge and memorabilia, a published author with Teenage Wasteland:: The Slasher Movie Uncut and one quarter of the hugely successful Hysteria Continues podcast team. I was incredibly lucky to sit down with him and quiz him on all his endeavors.

Justin, you are quite a heavyweight in the slasher circle, being a published author on the subject, a webmaster and an all-around trove of slasher knowledge and connections. But we want to know, what was your very first experience with the films?

Probably seeing trailers for films back in the early 80s, or the brief mentions â€“ often disparagingly â€“ on TV review shows, such as Film ’81(on the BBC). That and seeing posters at the cinema as the school bus passed,but being frustrated that I couldn’t watch them. Truly forbidden fruits.

Was there a defining moment, or a defining film for you, that made you sure or certain that Slasherdom was going to be a big part of your life?

Easy. It was watching HALLOWEEN II (1981) on a school friend’s Betamax as his Mum cooked us tea. Must have been around 1982 or 1983. It was everything I hoped for and more. It felt like coming home!

Strictly as a viewer,looking back now, being a teenager during the peak of the slasher boom, did you know this was something special, that these movies were going to have such a life?

Not really, to be honest. I think it’s rare to realise that you’re living through a special time whilst you’re living it. Having said that,these films were hated then and were seen as just one small step up frompornography. It’s easy to look back now with rose-tinted glasses, but back in the early 80s critics loathed the slasher movie and blamed them from everything from collapsing cinema attendance to being the blame for all of society’s ills.Even genre magazines such as Starburst and sometimes even Fangoria were sniffyâ€“ or even downright hostile â€“ to them. The video nasty debacle certainly didn’t help, either. Although, ironically, many slashers got passed over at that timeâ€“ but probably because they were so heavily pre-cut.

Moving on to slasherdom and the part it began to play in your professional life. What made you decide to create a website on the subject?

Pre-1996 and the resurgence of the slasher movie with SCREAM it was pretty lonely being a slasher movie fan. The subgenre was really in the doldrums and the classics from the early 80s certainly didn’t have the following they do now. Of course, this was all just before the web really took off. I wanted to share my love of the subgenre with others. I was surprised how much a slasher movie site resonated with people around the world.

Something Iâ€™ve been wondering for years, where did the title Hysteria Lives come from?

I don’t recall exactly. I know I didn’t want anything too generic. Hysteria was meant to symbolise the slasher craze of the early 80s â€“the sense of overkill and madness. At the time I didn’t know it was a Def Lepperd album title! That made finding a suitable domain name a little difficult. After about five years I thought I’d had enough, so I pulled the site for a while â€“ but I couldn’t resist returning. So, that’s why it’s Hysteria LIVES! It came back from the dead, as all good slasher villains do.

How was the initial response to the website when it first went online some 15 years ago?

Not sure if I remember! I think I was both shocked and flattered that people were reading it.

How do you feel about the site now? How does it feel knowing that over the years Hysteria Lives has become THE go-to resource for slasher fans all around the world?

Again, I’m flattered. However, I have so little time to update the site now. I’m pleased that it’s a resource for fans, even though some of the earlier reviews now make me cringe a little.

How did the whole idea for Teenage Wasteland come about, had you been planning to write a book on a subject so dear to you for a long time?

I’d always wanted to write a book on slashers, but I just got lucky. A friend of mine got a job as commissioning editor for a publishinghouse and it all fell into place â€“ albeit very, very slowly.

Can you tell us a little bit about the writing process of the book? How did you choose which films you were gonna include or which memorabilia you were going to include in the book?

It was a lot of fun writing the book, but also very challenging. I had envisioned a much larger book â€“ along the lines of Stephen Thrower’s Nightmare USA â€“ where I’d really go into the films in in-depth with interviews, background and more. However, fairly early on it was decided to make the book as much about the visuals as the writing. Then it became more so,and around 40,000 words of the final manuscript was cut! I had to fight to keep certain films in there, as I knew that I would be taken to task for not including them â€“ and rightly so. I’ve collected slasher memorabilia for years,so it was gratifying to see so much of it in the book.

In general how do you feel about the book as a whole once you saw the final product? My two cents are that it is perhaps the best commentary on the sub-genre. Itâ€™s in-depth,incredibly informative and draws attention to some real hidden gems. My favourite aspect though has to be that the book is so colourful and eyecatching. What are your thoughts?

I’m very proud of it â€“ and I think it’s a great little book.However, I do accept the criticism that some of the book only skims the surface of certain films. I would have loved to have gone into more detail â€“ and the first drafts did â€“ but I had to stick to strict word-count and keep cutting and cutting some more. Having said that, I think the trade off with the visuals is worth it. It’s probably the most colourful book on slasher movies out there â€“and given that it is such a visceral subgenre I was really pleased that so much memorabilia was used. â€¦ Just one word of advice to budding genre writers: don’t think it’ll make you rich!

Congratulations on getting the book published in the United States. How did that come about? And how do you feel about the title change?

That was through my UK publishers, who sold the rights for the book to be published in the United States. To be honest, I prefer the original title, but the book has sold very well there and on the plus side it can’t be mistaken for anything it’s not under the new title!

Can you tell us a little about how the podcast The Hysteria Continues came about? How did you become acquainted with your three co-hosts?

I just thought it would be fun to try a podcast after listening to the late great Cinema Diabolica and Outside the Cinema. Dedicating it to slashers would give it a unique twist to differentiate it from the myriad of other genre podcasts out there. I’ve known Joseph for almost as long as I’ve run Hysteria Lives! and we first met on the old alt.horror newsgroup. Erik must have also got in touch about my website back in the day. We met Nathan though Joseph and his slasher forum The Bodycount Continues. Hence the name: The Hysteria Continues!

How do you feel in regards to the loyal following that the podcast has? Did you imagine that youâ€™d still be doing it two years down the line?

It’s funny, we didn’t really imagine it’d last this long â€“or touch such a chord with people. The show has grown organically into its unique flavour â€“ which I imagine puts off as many people as like the show. But it is what it is and we do it for fun and the love of the subgenre.

As well as your book,the show and your website youâ€™ve had the pleasure of doing commentaries, liner notes and forwards for some fabulous recent releases. Do you have any exciting slasher related projects lined up?

Yes, that’s been fun! I recently had the pleasure of doing a commentary for the upcoming slasher documentary SLICE AND DICE: THE SLASHERMOVIE FOREVER, as well as doing a commentary for an extra disc of slasher trailers (I also provided much of the memorabilia shown in the documentary).It’s a fantastic documentary put together on love for the subgenre alone by the good people at High Rising Productions â€“ who do amazing extras for companies such as Arrow and the like.

Since you have such a large knowledge of the slasher film and what makes a slasher movie, would you have any plans to branch in film at all?
No plans at present. Sometimes I think fans make the worst directors!

Some quick fire questions, if you donâ€™t mind:
With such a large repertoire of slasher films to choose from, do you have an overall favourite?

Still has to be the original HALLOWEEN for me.

Is there a particular quote from a slasher movie that you have a fondness for?

What is the movie that you consider your guilty pleasure?

What film can you just not stand?

Is there any film in particular you would like to see remade?

And lastly, thank you wholeheartedly for agreeing to answer some questions for us, I appreciate itâ€¦And Siouxsie Sioux is awesome!

Thank you for asking me, Reece! And yes she is.