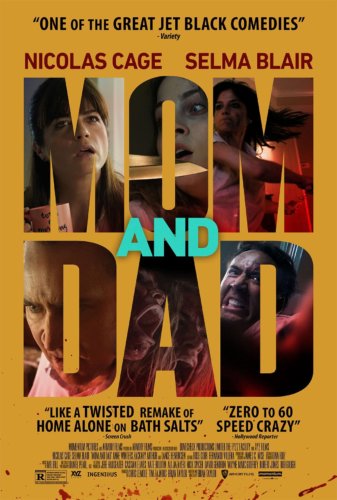 Parents in a small town suddenly turn on their children and start killing them. Carly and Josh eventually find themselves trapped in their house with their crazed parents and must now fight back against them.

This is a film that might discourage many due to the subject matter. But for those who enjoy some good dark humor/horror will enjoy this film. Granted there are some parts that might put at a little unease, it kind of adds to the intensity. The reason for the parents going crazy isnâ€™t revealed, but it plays with certain ideas involving parents just getting fed up with their kids and instead sarcastically saying theyâ€™re going to kill them, they actually do it. Itâ€™s a weird blend of almost zombie and slasher horror. The parents donâ€™t act like zombies, but thereâ€™s one big sequence where itâ€™s filmed like a zombie film involving a big group of parents outside the local high school. And along with that there are a few chase scenes that play out like slasher chase scenes. One sequence in particular towards the end involving a grandfather, father, and son as well as mother-in-law, mother, and daughter is just a blast to watch. What brings the most fun to this film is just how over-the-top it is, especially from the performances. Nicolas Cage and Selma Blair as the lead parents are fantastic and are clearly having a blast in their roles and easily deliver one of their best performances. The whole cast does a great job. Unfortunately itâ€™s not without its flaws. It definitely could have had more development of the family before the events began. We get some flashbacks as the events unfold, but I feel it wasnâ€™t enough to really service the family and make you hope for a positive outcome. And most of all, the very end is frustrating as hell, thereâ€™s no real payoff or major showdown between the kids and parents, it just abruptly ends. And when it ends, you feel like there should be at least another fifteen minutes. I apologize if that may come off as too big of a spoiler, but it has to be said.

Despite the disappointing ending and some underdevelopment, itâ€™s still a fun comedy-horror that I would recommend, even just for Cage and Blairâ€™s performances alone.