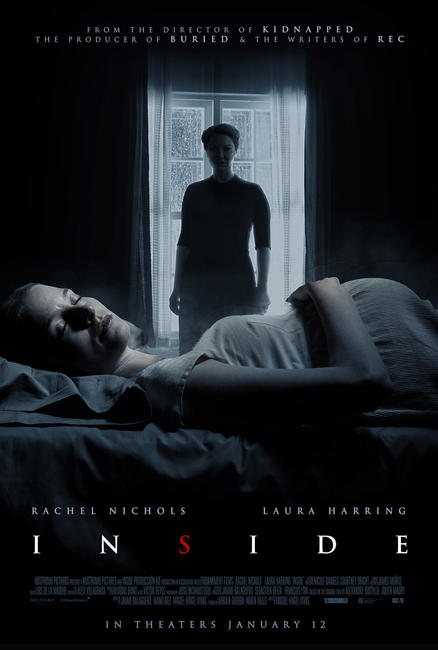 The remake of the French classic horror film revolves around the pregnant Sarah, who recently lost her husband (and her hearing) in a car crash. One stormy night, a woman breaks into Sarahâ€™s home and attacks her, she narrowly escapes and hides out in her bathroom. As bodies begin to pile up, Sarah must now fight back as she discovers what the woman is after.

Understandably, most people slammed this remake from the start. The original film is a bloody and brutal foreign horror film classic. People hated the remake of Martrys (I honestly enjoyed it), so I thought I could very well enjoy this remake too. I love Rachel Nichols who plays Sara, and Laura Harring as the woman was fantastic in Mulholland Drive. So to see Harring as the villain had potential to be great. Sadly, even these actresses couldnâ€™t save the movie. Unfortunately, I honestly didnâ€™t find these normally solid actresses all that good, in fact, their performances I found were really weak, especially Nichols. There were very few good things about this movie, one being that it was very well-filmed, and the other was the nice touch of making Sarah deaf, but at the same time they didnâ€™t do as much with that aspect as they could have.

As far as the movie goes, they hardcore downgraded this into a super dramatic Lifetime movie that was nowhere close to brutal. There wasnâ€™t much tension or thrills either. Needless to say, they really played this movie safe to where it was almost nothing like Inside. And then you have the ending that is so laughably cheesy, bad, and unrealistic. To be fair though, they make Sarah at least semi-likable in this movie, whereas I wasnâ€™t too fond of her in the original, she was a strong enough lead, but I think that she was kind of downgraded due to Nicholsâ€™ performance. Which is so baffling because she played an excellent lead in P2 and her performance was great in that.

I definitely canâ€™t recommend this movie. The acting is weak, itâ€™s pretty boring, and the final act and ending is just ridiculous. If you hated the remake of Martyrs, youâ€™ll hate this one even more. If youâ€™re curious, wait for Netflix, but other than, stay away.