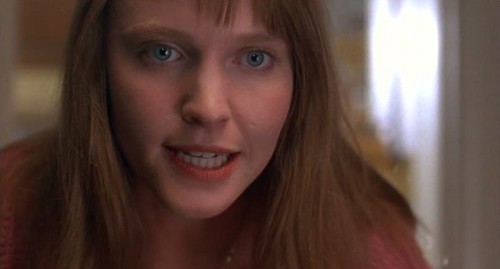 What makes a good Scream Queen or Final Girl? Well, near the top of the list of qualifications, the girl in question needs to actually survive the film that she is in. Well, this brings us to our Slasher Studios Scream Queen of the Week, the lovely Lisa Wilcox. You see Lisa is the only person in the entire “Nightmare on Elm Street” series to successfully live through two films. That puts her a cut about Heather Langenkamp who sadly dies in “Nightmare 3”. Yes, I know Heather returns for “New Nightmare” but she is playing herself so different rules apply. So what makes Lisa a great Scream Queen? She is beautiful, resourceful, and immensely likable.

Alice is one of the few characters from the Nightmare series that we actually see grow throughout the films. In “Nightmare 4” is the shy, timid, plain girl next door who lets the world walk all over her. By the end of the film, she has grown into a fighter. She isn’t willing to just let Freddy take over her life..she has become stronger than that. Even in “Nightmare 5”, which is one of the weaker sequels in the franchise, she is determined to beat Freddy in order to save her unborn baby. Today Lisa has shied away from horror and that’s really too bad. She’s a very beautiful and intelligent actor who should have taken the horror world by storm. Still, given her strong performance as Alice, she still deserves the wonderful title of Scream Queen of the Week.