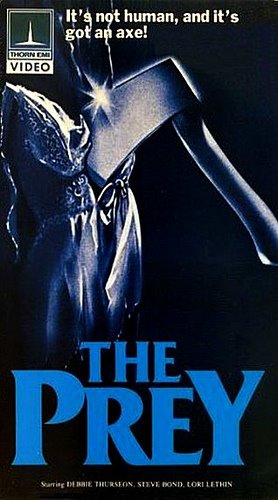 “It’s not human, and it’s got an axe!” Well, I suppose it does have an axe at the start, but burns or no burns, it’s still a disfigured gypsy boy! 1984’s The Prey is one that has earned a soft spot with me ever since I first tracked it down 5 years ago. It’s a classic slasher tale of young adults roughing it in the great outdoors around a campfire and relaxing while an unseen killer picks them off one by one during the course of two days. Obviously shot in the years between 1978 and 1980, it took a while for this to find a release, and when it did, was trimmed of a good hunk of backstory originally filled with aggressive nudity and a reason for the murders taking place. Not that it was needed. The cut form that this films most commonly lives in is fine on its own and keeps the runtime at a brisk 80 minutes.

Sadly, this never receives the loving that it truly should. If people commend Halloween for being simplistic, why brain this one on the rocks? Often criticized for its pace and inserts of nature footage, I fail to see the problem that people have with this aspect of the movie. As if the forest being shot in wasn’t gorgeous enough, the extra bits of insects and wildlife going about their nightly duties add a grounding to the film that captures what many are unable to do while in your own home. The shots don’t even last for THAT long, and the overall pacing isn’t an issue with me whatsoever. When you have lovable characters like the mirror-obsessed city gal Gail and the dopey banjo-playing ranger Mark who tells jokes to animal friends, I fail to grasp what detestable being others appear to rag on.

The kills are bloody in variety, the cast is fun to watch interact & the score hits you over the head with its outlandish angry vibe. What’s not to love? The story isn’t convoluted by annoying uninteresting subplots and it ends on a downbeat note that The Dorm That Dripped Blood would be proud of. I have a handful of beloved slashers that simply won’t work over the majority’s hearts, but this one takes the cake with these frequent minor complaints and a rating of just barely over 3 at IMDb (though those should always be taken with a grain of salt). Give it some time and you’ll see how this criminally underrated backwoods slasher is far more deserving of a place with the modest entries from the era.