To start out the slasher weekend we have a brand new Inspiring Scares installment for all you horror fans. This one comes from horror writer-director Justin Russell who brought us the awesome 80’s slasher homage THE SLEEPER. Here he talks about the horror movie that changed his life forever. 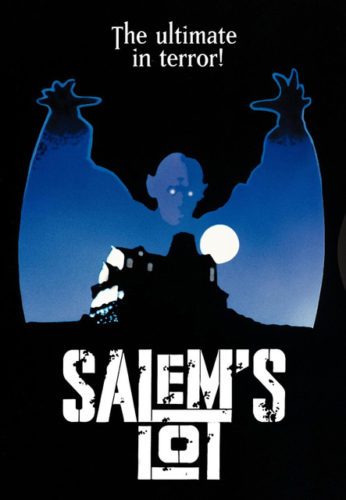 “When I was around 10 years old, my brother and I were introduced to a film called, Salem’s Lot, which subsequently is now our favorite horror film. Stuck at our Grandparents house for an afternoon while the adults talked, my brother and I sequestered ourselves in the TV room. I remember my brother flipping through the channels and landing on the miniseries. For some reason, he left it on. Back then, there was no digital cable. There was no way to tell what you were watching without TV guide or waiting for a commercial break for the announcer to tell you what was on. For some reason, we hung on and began to watch the classic from ’79, not knowing what we were in for. At the time, I was terrified of horror films. I was easily scared and didn’t care for the “thrill.” My brother however had an early love for horror and the scare.

In Salem’s Lot there are several moments that I still consider horrifying. At the time, the images bothered me so much that it kept me up at night staring at my window. My brother now admits that several of the scenes in the film left him unsettled as well. For those of you not familiar with the film, it , by today’s standards, is a slow burn. In the late 70’s and early 80’s, horror films had an atmosphere. The feeling those films deliver is unparalleled. That is what made Salem’s Lot so great. The entire film is built around a town being taken over by vampires, done almost entirely behind the scenes. The first scene that truly horrified me was when Ralphie Glick disappears and comes for his brother at night. There is a low drone and smoke outside the window as the young boy approaches. He then scratches the window, putting his older brother in a trance. Danny Glick opens the window, letting his brother float in and bite him. After the scene ended I looked to MY brother. We both shared a similar response to the scene.

Because the film is so long, we fell asleep at parts, waking up for the horrifying moments that happen later involving more vampires. This included seeing the head vampire, Barlow. My brother quickly became obsessed with the film, purchasing it on Double VHS and watching the whole thing again. I was so terrified, that I stayed away from horror for as long as I could. My brother fell in love with the genre and when he got a license, headed to the video store to saturate himself with the classics. When I got a little older, I began to get tempted by his VHS collection. I would hang out in his room and watch his films when he was gone. Still scared of these movies, I would make sure to watch them during the day. Nightmare on Elm Street, Friday the 13th, Evil Dead, and the list continues.

During sleepovers at my house, I would fire on a film I saw, acting brave to impress my friends as they revolted from the gore and blood. When I was 12 my dad gave me a camera and I began to shoot my own horror films. Copying what I saw, using phones like Scream and masks like Friday the 13th. At the time I still wasn’t truly into horror films. I liked watching them because they truly did scare me! I can admit that. But the love was beginning to develop. I just didn’t know it yet.

When my brother went to College, he joined Netflix and began seeing even more masterpieces. Lots of films that were unavailable at West Coast Video and Hollywood Video. Films that were making a resurgence because of DVD. He would send me some in the mail and say “watch this,” or “you won’t believe the GORE.” Most of the films were from the late Fulci or the master Argento.

The films finally began to sink in. I’d seen almost all the classics and was hooked. My favorites to this day have always been the early 80’s slashers. They are simply put, beautiful. I’ll never forget my first experiences with those films. Most of which I watched with the company of Joe Bob Briggs or through the tracking marks on the VHS tapes. Salem’s Lot, one of my first horror experiences, will always be my favorite. The experience of seeing it the first time in the middle of the day and still be scared is a true testament to the film. As a horror director, I have been chasing the dragon for years, trying to create something as beautiful as those early films. I hold them up as a reference point. These films from the golden age are still the greatest. Any horror fan’s list of greats will include a film from the late 70’s or early 80’s. I can only hope to one day create something that will scare a young 10 year old and keep him staring at his window at night.”

To buy THE SLEEPER: The Sleeper