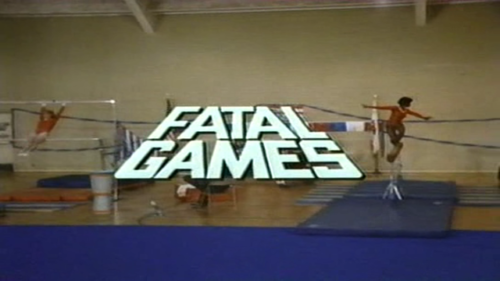 Kevin: “Fatal Games” has quite possibly the most accurately hilarious description on IMDB that I have ever seen. “A mad javelin thrower kills teenagers in the school. All promising athletes are executed in the most brutal way. Especially naked girls in dressing-rooms or saunas.” In three sentences you immediately know if this is the kind of slasher for you. Luckily enough for me, it was.

Steve: Most of us who love the thrill of 80’s slashers, will also love the agony of defeat these poor olympic hopefuls face. Chalk full of sex crazed guys and nude girls, Fatal Games delivers some fun deaths, a couple chase scenes and even likable characters. The olympic aspect helps set it apart from other films in its genre. A nice change of pace as the young characters find themselves together at the training facility, rather than a cabin.

Kevin: With one of the strangest and actually quite creepy endings of a slasher that I have seen in a while, “Fatal Games” adds a twist that is so implausible that it really must be seen to be believed. Tonally, the film is all over the place. The opening theme song of “Take it to the Limit” feels right out of a “Rocky” sequel, then the film turns to some hi-jinks with the Olympic hopeful “teenagers” who are at least a decade too old to be playing seniors. Starting with the second act, the murders take form and the killer wannabe Olympian is out for revenge. It’s a very, very strange movie. Not exactly good but compulsively watchable.

Steve: Yes, very watchable for a number of reasons. The “national lampoon-like” comedy at the beginning gives us some cheesy laughs, but that does not last long as the film takes an abrupt turn in the tone and feel. The motivation for the killings is a big surprise at the end and definitely pieces a few odd parts together from earlier in the film. With a great score found throughout and classic 80’s cheese from beginning to end, Fatal Games is a fun little film. Just make sure you are ready to have the opening song stuck in your head for days to come.