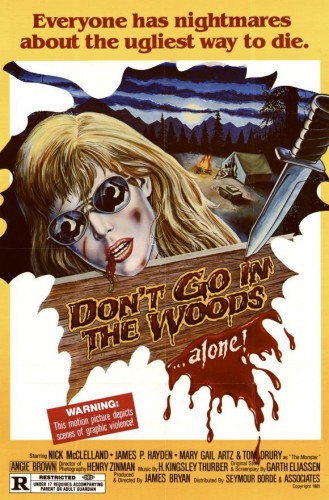 I have been a HUGE fan of â€œDonâ€™t Go In The Woods…Aloneâ€ since I was thirteen years old. I first rented a tarnished VHS copy from my local video store. Being a fan of low budget, independent horror films, I fell in love with this movie immediately. Just a heads up, if you can’t handle a low budget movie with bad acting, and no real storyline, then this movie isn’t for you.

The plot is about four campers that enter the woods and soon discover they have invaded a madman’s territory. Sound familiar? Although there are only the four main campers, about every 8 to 10 minutes a random new camper will appear just to add to the films body count.

This movie truly contains more cheese than the entire state of Wisconsin. This no-budget b-flick is so cheesy it should have been sold with a bonus box of saltine crackers. The soundtrack is indescribable. I have no clue how they made some of those sounds, and sometimes the music plays at odd times when nothing is really happening.

The acting in â€œDonâ€™t Go In The Woods…Aloneâ€ well…I recall one actress that spoke these lines: “I can’t believe my eyes! It’s over.” She utters these lines as if she is asking for a cup of tea, not as though in relief that the nightmare she has just endured is now over. Also how can we not
forget the characters â€œDickâ€ and his wife â€œCherry?â€ When I first watched this, I literally thought Cherry was played by a guy. I was wrong. The dialogue between these two is so horrendous, you honestly have to stop and think for a minute, what was James Bryan thinking?

Don’t expect the production values of even a “Friday the 13th” film. Don’t expect any production values at all. Believe it or not this film has generated a fan base. This is definitely one of those films I can say â€œItâ€™s so bad, itâ€™s good!â€ I own the 25th anniversary edition dvd that Code Red put out in 2006. I also have the original 27 x 40 movie poster hanging proudly on my wall.

Bottom line, this movie is a lot of fun. It has some really good gore scenes too. The acting is horrendous, but in the end it all seems to work.

Check out â€œDONâ€™T GO IN THE WOODS…ALONEâ€ tonight! Recommended!