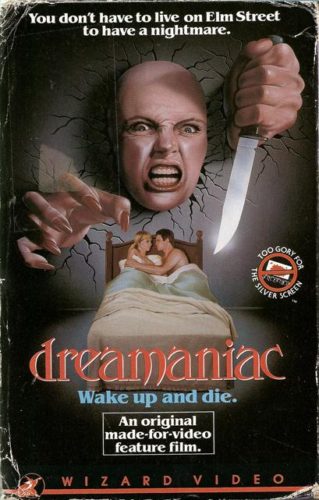 Patching together a mish-mash of moments from better genre films, Dreamaniac is a supernatural slasher that seems to be bored with itself. Content to be a placeholder for a VHS sleeve with garish cover art and promises of unimaginable terror, the actual film limps along as nothing more than a tolerable diversion and an excellent museum exhibit of how people dressed in the 1980s.

A musician calls up a demon that starts out by having sex with him and moves on to kill everyone at a party being held at the house he’s staying in. Though there are heavy metal and black magic implications to the proceedings, the film doesn’t really expand on these themes. One character says it best (and may in fact define the entire movie) when she says, “I don’t know much about heavy metal. I mean, I’m into Lionel Richie.”

It’s likely no one cared about this film except the person responsible for the costuming. The acting mumbles and drags. The lighting feels lifeless, even for 80s VHS fare. The plot moves from kill to kill as if absently crossing off items on a checklist. The sex scenes are stagey and awkward.

The clothes, however, make the film. Banana clips, red pumps and black fishnet stockings. Bangs and pastel stirrup pants. Lumpy sweaters. As fun as marveling at what people used to where can be, these outfits arguably define the characters more fully than the script or the direction.

Dreamaniac ends with a whimper by tacking on an unnecessary twist ending, making the pleasantly bad film seem less satisfying. Even so, it manages to be an entertaining 82 minutes of supernatural slashing, better for viewing with like-minded company than concentrating on alone.