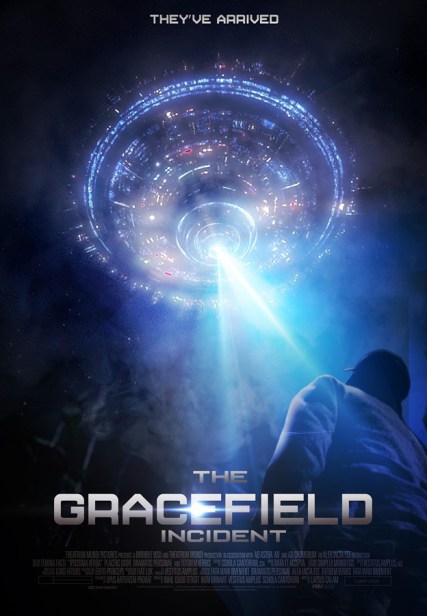 After a husband loses his and the wife loses their baby in the same car crash, time goes by and the couple, along with a group of friends, go to stay in a cabin for one of the friends’ birthday. That night, a large object flies overhead and crashes. When the men go to investigate, they find a strange rock and decide to keep it. What they don’t know is that something is now following them, and it’s not friendly.

This alien invasion/found footage horror film doesn’t serve anything new to the genre. It’s not even effective entertainment. It’s actually a really boring and uninteresting movie altogether. Though I gotta say that the husband placing a camera into his fake eye is a nice touch, even if it doesn’t improve the movie any better. Besides the eye camera, everything the characters film is through their iPhones. Had it just been the eye recording everything, it could have been a bit more original in the found footage aspect. The characters themselves are just as boring and uninteresting as the story. The movie is a mere hour and 20 minutes and it goes by so fricken slow. I don’t complain if a horror movie isn’t scary, but there isn’t even a smidge of tension to be found, and it definitely doesn’t seem like there was an effort. The aliens themselves even look ridiculous, not laughable per se, but severely mediocre.

In some ways I can’t even call this a horror film due to the end result. The whole movie plays out as a “lesson learned” movie where everything turns out okay in the end since the main character has learned their lesson. I have never seen a horror movie end in a more cheerful note, happy music playing and all. Quite frankly, it made me disgusted. That’s not to say every horror movie should have everyone die or have an unhappy ending, but to end in a way where the whole thing might as well have just been a dream and everything is all good in the hood is an entirely different matter. In terms of acting, there isn’t anything to brag about. I’ve definitely seen much worse, but the acting feels just as mediocre as everything else about the movie. If you want to see an actually pretty good and suspenseful horror movie, check out Phoenix Forgotten when it comes out on DVD and Blu-Ray. It’s not fantastic, but it offers a lot more than this one does.