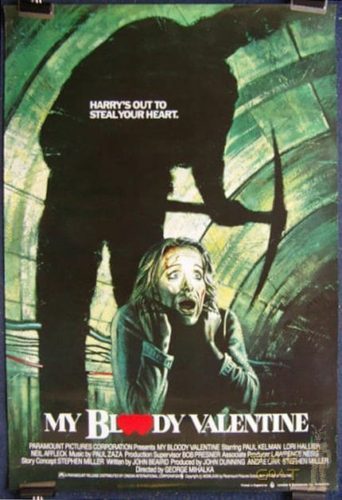 With Valentine’s Day right around the corner, horror fans are clamoring to their collections to find the perfect movie to put in and watch with their Valentine. Horror and romance go hand-in-hand and I’ve found that if your significant other can sit through the right slasher film, then it’s the horror equivalent to Cupid’s arrow. It seems only fitting that during this holiday of love and paper hearts that the Canadian slasher classic â€œMy Bloody Valentineâ€ should be top of everyone’s list as it’s one of the few Holiday slashers to take on this specific day.

â€œMy Bloody Valentineâ€ is a strange film, not in the sense of story or concept, but more in the sense that it hasn’t caught on over the years as being one of the seminal slashers. It has a strong cult presence, but it’s not in the same breath as films like â€œHalloweenâ€ or â€œFriday the 13thâ€. In my personal opinion, it’s one of the best examples of an ’80s slasher that I can think of and deserves a lot more credit. 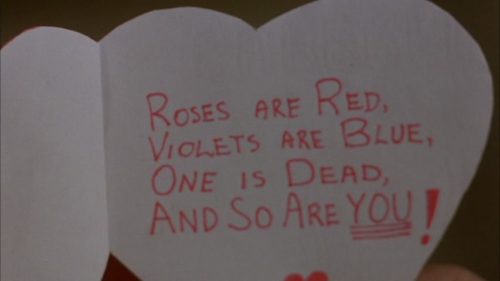 â€œMy Bloody Valentineâ€ is the story about a small mining town called Valentine’s Bluff and their dark past. 20 years ago there was an accident where a group of miners got trapped inside the mine while others were decorating for the annual Valentine’s Day party. The sole survivor, a man by the name of Harry Warden, killed the other miners and warned the town never to celebrate Valentine’s Day again… or else. Then, a group of young people in town decide to defy this omen only to unleash the wrath of a killer in mining gear. MBV takes it subject matter seriously and doesn’t go too over-the-top or too goofy. Sure, some of the characters may be a little silly, but they feel genuine and not forced. It’s one of the most atmospheric slasher films ever produced and uses it’s dreary locations to it’s advantage. From the catacomb-esque interiors of the â€œHanniger Minesâ€ to the sleepy, Nova Scotia town used as â€œValentine’s Bluffâ€, nothing felt out of place or inappropriate. To this day as I watch MBV I believe in these characters, their town and the bloody omen left by Harry Warden.

Each time I watch this film I’m left with a heartbroken feeling by the end that I’ll never see these characters or this town again. You grow to really feel for the characters and feel strongly invested in the love triangle between T.S., Axel and the women they love, Sarah (played by the really gorgeous Lori Hallier). In 2009, a 3D re-make was made of MBV, but even though I enjoyed it for what it was, it felt watered down and didn’t have the small-town atmosphere of the original. None of the actors in the remake felt like they were really from Valentine’s Bluff, while the actors in the original felt as if they were cast at the local watering hole. 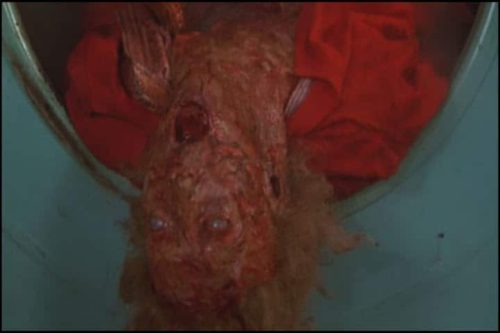 I also have to say that Harry Warden is one of the most iconic killers of all-time but has never really caught on. Many have used a gas mask to great effect (the first to come to mind is the film â€œBlood Junkieâ€ made by fellow Wisconsin filmmakers Drew Rosas and Nick Sommer), but few have stood with me the way that Harry Warden has.

I believe part of the reason MBV never caught on was because of all the censorship by the MPAA. The film was considered far too graphic and the filmmakers had to go in and make cuts to every single death in the film! Some say that Paramount was still feeling the backlash from the lack of edits in â€œFriday the 13thâ€ and happily agreed to the new edits. It wasn’t until 2009 that a version of the film was released with the cut footage re-added. I believe, as do other horror fans, that if the film had been released sans the edits, it would have been much more well received by genre fans and would hold a place in the annals of Slasher History. Two and a half minutes may not seem like much time to cut from a film, but in the context of blood and gore that was removed, it adds up significantly. Any film editor can attest that two and a half minutes is much longer than most people expect.

And, in closing, let’s not forget the chilling theme song written by Paul Zaza that still lingers in my mind today. When it starts over the end credits with a demented laugh, the hairs on your arm stand up! In my personal opinion, it’s the best use of an end credits theme with â€œSleepaway Campâ€ come in a very close second.

It’s hard to forget lyrics as chilling as these:
Once upon a time, on a sad Valentine,
in a place known as Henniger Mine.
A legend began, every woman and man,
would always remember the time.
And those who remain, were never the same,
you could see, the fear in their eyes.
Once every year, as the fourteenth draws near,
there’s a hush all over the town.

About the Author
Michael Viers is an award winning filmmaker from Milwaukee, WI. He graduated from the University of Wisconsin â€“ Milwaukeeâ€™s with a Bachelorâ€™s Degree in film and has made two successful short films during his stay at the university: From the Darkness Theatre which screened at the Short Film Corner at the 66th Festival de Cannes and Love You Still which debuted at the 2013 Milwaukee Film Festival. Heâ€™s currently trying to get more work writing articles about film and allocating resources to make his first feature film. 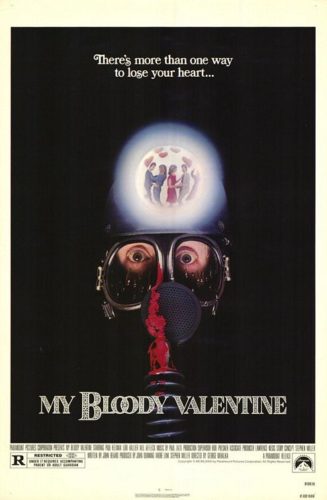 To end this beautiful sunny weekend we have a brand new review from our resident twitter reviewer Tim Schilling. Today Tim is getting out his pike ax to take a stab at the original 1981 cult classic “My Bloody Valentine.” Butchered by censors and critics and ignored by audiences, the Canadian slasher has grown quite the cult following throughout the years. But, is it a cut above the rest or is it a slasher that deserves to be forgotten? Let’s cut open this bloody heart and find out.

Thoughts before the film:
I’ve never seen the original #MyBloodyValentine. I have seen the remake though and I actually liked it quite a bit

Thoughts while watching:
0:01 Who gets frisky in a mine shaft!?
0:04 Don’t drop the soap.
0:06 This hillbilly music reminds me of Two Thousand Maniacs.
0:08 The guy who was dancing with the cutout and said “this is my date”…. me.
0:17 Oh Harry Wardon, you sly guy you.
0:25 This town sure does like valentine’s day…
0:27 I wonder if that’s what you really look like if you were to get stuck in a dryer.
0:27 Or, better question, how did the filmmakers know that’s how someone would look like!?
0:37 What a grumpy bartender.
0:50 Those are the nastiest looking hotdogs ever.
0:58 This mine shaft must have magic powers cause everyone who goes in it, ends up fucking. Or, at least trying to.
1:10 Oh, I didn’t know Barbra from NOTLD was in this. (someone please get this)
1:20 At least the police showed up while the killer is still around and not the second after he dies/runs away.
1:20 Not that they can do anything to help anyways. I mean, they’re the police and it’s a horror film. They’re useless!
1:27 Those last lines were really creepy… Beeee my bloody valentineeee.

Overall:
Not too sure why I liked #MyBloodyValentine. The plot was meh but the filmmakers made a meh plot into something entertaining & actually good.