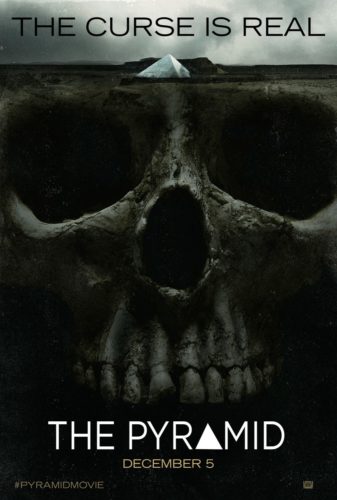 A group of archeologists and a documentary crew embark to a location near Cairo, Egypt. Discovery of an underground pyramid has been uncovered and the crew seeks to learn more about it. Upon entering the pyramid they find themselves lost, and eventually hunted. To find a way out alive, they must go further into the crypt and learn all of its secrets.

Alexandre Aja who brought us the Hills Have Eyes and Piranha remakes, as well as High Tension, and Mirrors returns to the big screen this time as writer and producer. The film initially had a wide release but ultimately was cut to just under 600 theaters. This is rather unfortunate because it ended up being a rather entertaining and intense film unlike the earlier â€œundergroundâ€ horror film As Above So Below. Ever since High Tension, Aja has always had a knack for bringing on intensity and atmosphere in his horror films, even if they didnâ€™t end up being that great as a whole. While The Pyramid does feature several formulaic aspects, they work out well here. Once events begin to really begin, so does the intensity. There are many instances where the characters find themselves roaming in the dark and you anticipate something to jump out, as well as just situations that leave the viewer tense. Despite being half found-footage and half actually films, the two are blended together very well, making the atmosphere and intensity even stronger. As for the story itself, it was pretty engaging, it was enjoyable to have the mysteries of the pyramid unleashed the further they got into the structure (which tends to happen right?), it leads to a final act that left me thinking different theories of how itâ€™s going to possibly end as opposed to just one no-brainer ending.

The acting by the cast pretty well-done, as was the character development. Ashley Hinshaw who plays the lead, Nora, a young archeologist with a surprising amount of knowledge of tombs and their history, does well with the role when it comes to showing fear and expressing the emotional moments. Denis Oâ€™Hare plays Hinshawâ€™s acheologist father as well as the leader of the group with the knowledge and the plan. The actor who stood out most to me was James Buckley who plays cameraman Fitzie. Buckley provides a lot of the humor in the film and is the one who basically speaks for the audience in certain situations. For the most part, the characters are all likable except Christa Nicola who plays Sunnie, the journalist conducting the documentary. Sheâ€™s the character who is just so annoying you canâ€™t wait for her to die. Other than that character, everyone is fairly likable.

Alexandre Aja delivers to horror fans another solid, yet not entirely original film. If youâ€™re looking for an entertaining film purely for fun thrills, some humorous moments, creepy atmosphere, and intensity, The Pyramid is well-worth seeing. If there is a theater near you showing it.