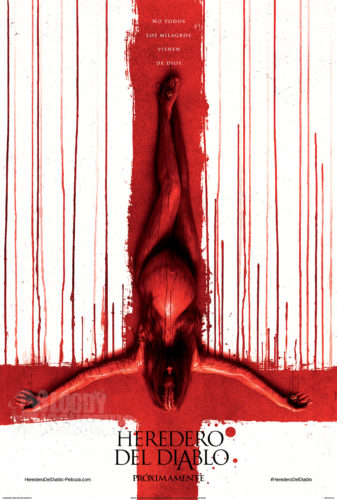 During their honeymoon, newlyweds Samantha and Zach couldnâ€™t be happier, however upon waking up one morning, they have no recollection of what happened the night before. It isnâ€™t too long after returning home that the happy couple find out they are having a child. But during a time of what should be pure happiness soon turns into a nightmare as the couple find themselves being watched and Samantha begins exhibiting strange behavior.

Devilâ€™s Due is yet another entry in the found-footage genre. The film can be considered an almost younger generation and found-footage version of Rosemaryâ€™s Baby. However, this film has no chance in hell (no pun intended) of reaching the status of the classic horror film. It doesnâ€™t even stand a chance of reaching Paranormal Activity status. The story may be interesting, but the film itself is just plain boring. There is no intensity and no atmosphere whatsoever. Throughout the film we just see Samantha becoming more and more hostile with random and clichÃ©d jump scares thrown in. And a lot of the creepy moments end up being humorous than anything. By the time we reach the climax of the film where (as usual) all of the real action occurs, itâ€™s over before it even begins.

Despite the filmâ€™s boring outer layer, we are given some pretty good performances by our two leads. Zach Gilford brings a lot of charm to the role of Zach, at the first of the film heâ€™s the goofball husband that everyone will seem to adore. But when things start getting serious we see Gilford switch gears into the concerned husband and he does a fairly good job of it. Allison Miller plays Zachâ€™s wife Samantha. Like Gilford, Miller shows the sweet and innocent side of her character and we ultimately love her too, but when she needs to show Samanthaâ€™s gradual change of behavior, she has a few moments where she could have gave it more of a boost, but otherwise she gives it what she can and itâ€™s satisfactory enough. The two also have great chemistry together, which also helps the audience care for and root for the two characters.

Devilâ€™s Due may be a huge snooze fest and wonâ€™t leave a mark on the found-footage genre, but it at least has two decent lead actors to keep it from being a total disaster.