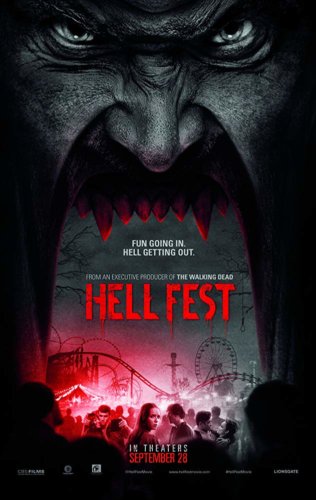 A group of friend attend a traveling horror festival where a masked killer begins to stalk them and seeks to make them his newest victims.

I am still shocked that this movie managed to snag a large theatrical release. Almost everything about it looked like a straight to digital/very limited release. So I was very much excited to see that an original slasher film was getting a theatrical release. This movie turned out to be better than I expected. I had a blast with this film from beginning to end.

I fell in love with the characters almost instantly and found myself wanting to be a part of their group. They werenâ€™t annoying or dramatic or stereotypical. Just a group of fun-loving and thrill seeking friends. Granted we are dropped hints early on, and occasionally throughout the film that this is some off-backstory regarding the lead and her relationship with her best friend and her best friends roommate that arenâ€™t entirely brought to light. The setting of the film is fantastic. They brilliantly capture the spirit of horror attractions and the people who go through them. Not only this but they use it so perfectly in major moments of the film that brings a lot of intensity, especially in the final act where a major cat and mouse chase scene happens. As fun as this film was, it definitely could have upped the kill factor. It wasnâ€™t as gory as I was expecting, which I can get passed, but there is a moment towards the end of the film where the writers chose to kill off two character simultaneously in the same lame fashion, clearly just so they could wrap things up and get down to the big chase mentioned above. There are some moments that occur that will make people question the logic of certain events, some of them I caught, but I wouldnâ€™t necessarily hold it against the movie as a whole. It does go on a couple of minutes longer than it should have to reveal a final scene that I didnâ€™t find all too necessary, mostly because it didnâ€™t really provide anything interesting to leave with. Itâ€™s also worth mentioning the great score by Bear McCreary who provided us with the fantastic score for 10 Cloverfield Lane, the score in this also adds a great amount of suspense to particular scenes. The cast here is clearly having fun with this film and their roles to the point where much of their behavior and dialogue felt pretty damn natural.

While our three main guys did a fine job with their respective roles, itâ€™s the three leading ladies whom I felt brought the most life to the film. Amy Forsyth stars as our lead girl Amy. Forsyth does such a great job of showing this scholarly, shy girl and then really delivers it when her characters fights back. I would go so far as to say that the character of Natalie and Forsyth herself turns in a performance that could easily be considered a modern day Laurie Strode (yes I went there). We then have Reign Edwards as Natalieâ€™s best friend Brooke. The pair share some solid chemistry and the two charactersâ€™ friendship in sweet enough, and Edwards does a good job of being the teasing and prodding best friend who wants the best for Natalie. And finally we have Bex Taylor-Klaus as my favorite character in the movie, Taylor. Taylor-Klaus easily brings the most fun and sass to the film and her character. Watching Taylor feels as if I was really watching Taylor-Klaus just be herself on-screen. Sheâ€™s a thrill-seeker with so much spunk and sass and isnâ€™t even ashamed to jump at the jump scares in the attraction, no matter how brave she tries to present herself. As far as the killer, there isnâ€™t exactly anything special or memorable about his appearance, but heâ€™s still a creepy enough presence and enjoys taunting his victims.

I definitely feel this will be a movie that horror fans will either love or hate. Itâ€™s definitely flawed as far as some writing choices, but when it comes to a fun and original slasher film thatâ€™s actually seeing the light of day, with a fun cast and all around likable characters, and an amazing setting, I would say thatâ€™s worth more than a couple of writing flaws in my book.