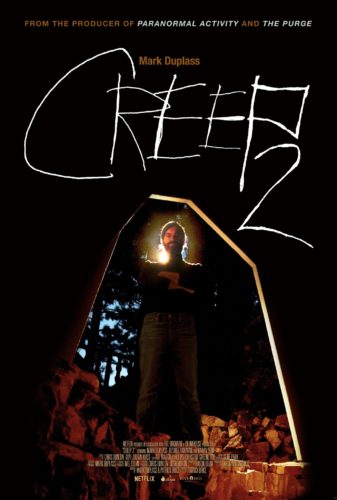 Following the events of the first film, Josef (who is now going by Aaron) reels a new victim named Sara. Sara has her own YouTube channel where she meets people of Craiglist with unusual desires and uses it as an exploration of people. Seeing this as a new opportunity for her channel, Sara takes on Aaronâ€™s post. When she meets him, heâ€™s beyond forward, and Sara is eating it all up, seeing him as just a weird character and not believing anything he says. She learns that she should probably be being more cautious.

The original film Iâ€™ve come to find is really divisive. I personally enjoyed it for how well it makes the viewer uneasy and on-edge. Not only that but Mark Duplass turns in a fantastic performance. Well, for the sequel, Duplass once again turns in a fantastic performance, however, this one didnâ€™t leave me feeling uneasy or on-edge at all. In some ways I can respect Creep 2â€™s ambition to make this entry more of a character study of Josef/Aaron, and it actually does a great job of that. And along the way we get not only the aforementioned great performance from Duplass, but also a well-done performance from Desiree Akhaven as Sara. Itâ€™s really interesting watching these two engage with each other and often times it seems like theyâ€™re both playing games and you are enticed to see who will win.

That said, all of that works for half of the film, but it continues on for basically the whole film and doesnâ€™t go into any suspense territory until around the last 5-7 minutes. And by then itâ€™s not really that effecting. The final scene of the film was pretty interesting and could take us somewhere interesting in the third film however. I mean there are moments of slight discomfort, but thatâ€™s only because much of these moments are just so awkward and weird. If you didnâ€™t like the first film, chances are youâ€™ll hate this one. This sequel is ambitious and boasts two great performances, but I honestly feel the lack of tension, unease, and suspense was lacking a lot. I wonâ€™t go so far as to say I donâ€™t recommend this movie. If you did like the first film, I do say go ahead and see this one, but I say proceed with the knowledge that this movie goes to a much different beat than the first film.