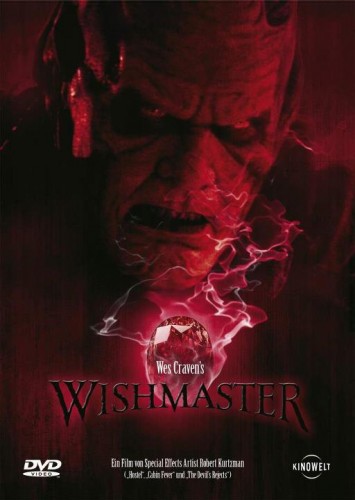 The movie tells the story of an ancient Djinn which is trapped inside a red diamond and waits for somabody to unleash its power. The movie begins with a narration of the back story of the Djinn and says that the one who wakes a Djinn shall be given three wishes. Upon the granting of the third, the unholy legions of the Djinn shall be freed to rule the earth. Fear one thing in all there is…fear the Djinn.

Then the scene tales place in America where a wooden crate falls and breaks by accident. A worker finds the diamond and keeps it only to find out the wicked results of posessing it. The truth is that we are talking about a very bad movie here but very pleasnt to watch. There are some very interesting cameos in the movie such as Robert Englund who was Freddy Krueger in the Nightmare on Elm Street series, played an antique collector and Kane Hodder, who played Jason Voorhees in the Friday the 13th series, played a security guard. Also in the film were Tony Todd from Candyman, Ted Raimi from Darkman, Evil Dead 2 and Army of Darkness, Ricco Ross from Aliens, Joseph Pilato from Day of the Dead, Reggie Bannister and the voice of Angus Scrimm (both of the Phantasm films), Jenny O’Hara from the later Devil, Jack Lemmon’s son Chris Lemmon from Just Before Dawn and George “Buck” Flower (who was often used in small parts in various horror-movies of the 1980s and early 1990s, often directed by John Carpenter). Verne Troyer of later Austin Powers fame appears as the smaller Wishmaster when he first escapes from his gem prison.

It is also interesting to note the appearance of a Pazuzu statue, a personification of the demonic figure which possessed Linda Blair’s character in the Exorcist series. This can be seen in Beaumont’s collection room and on display during the party scene where it attacks some of the guests, though it is never formally referenced. Wes Craven was one of the producers of this films. Anyway, every decent director has the right to astray once a while. So, are you ready to make a wish?