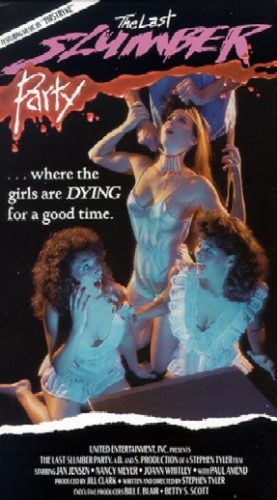 Kevin: On their last day of high school, Linda, Tracy and Chris celebrate by having a slumber party at Lindaâ€™s house. The girls invite some boys over to have the time of their lives. Little do they know, the girls have another visitor. Hiding in the house is a homicidal maniac who has just escaped from a mental hospital dressed like a doctor. Armed with a scalpel, the doctor slashes gets ready for the night by slashing up Chris
and her dimwitted friends. Are Chris and company smart enough to survive the night? 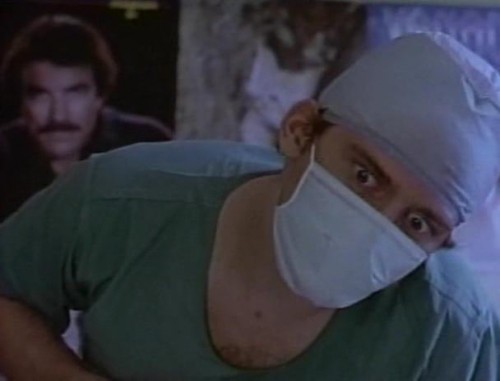 Kevin: There are bad movies and then there is â€œThe Last Slumber Partyâ€. The film looks like it was made for about $20, features â€œactorsâ€ who wouldnâ€™t be able to get extra roles in community theater, and has the audacity to be neither gory OR show nudity. The film claims it was made in 1988 but looks like it was probably filmed in 1982 or 1983 tops. The film looks wretched, shots go on and on to the point of boredom, and the sound switches from not being able to hear a damn thing to shouting in your ear. Sound like your cup of tea? Well dig in and enjoy the bad horror movie you are soaking in.

Where do I begin? How do I categorize a â€œfilmâ€ that is from an entirely different planet? Itâ€™s a horror movie thatâ€™s not horrifying in the slightest. Itâ€™s a slumber party flick that is unlike any slumber party Iâ€™ve ever attended. Itâ€™s hilarious and cringe-worthy at the same time. It makes absolutely no sense but I TOTALLY get it. Itâ€™s the ugliest looking movie Iâ€™ve ever seen, yet I think itâ€™s an art masterpiece. It was the first movie of its kind and there will never be another movie like it. The Last Slumber Party is my #1 favorite so-bad-itâ€™s-good movie!

It only runs 71 minutes, but I can honestly tell you that if it was 8 hours long I would never get bored. Iâ€™m not going to tell you the plot because itâ€™s irrelevant. What makes LSP so bad? The production values are extremely low and crappy. Not only were the worst possible cameras used, but the quality of the film (and video) varies drastically throughout. One minute the picture quality looks like crap, and the next minute it looks like a piece of crap took a shit. The entire movie feels like a bad student film, and it probably is. The actors playing high school students look like they graduated from high school 15 years before. And you can forget about any believable special effects; you can see the blood squirting out of the fake knife.

So what makes LSP so great? Well the acting is horrible, but I find it endearing and hilarious! Weâ€™ve all seen bad acting, but youâ€™ll be shocked and amazed at just how bad it really is. Donâ€™t worry, there are plenty of drug-induced flat deliveries of lines and blank stares at the camera to go around. This movie is filled with plenty of stinky cheese to invade your nostrils! And who can turn that down? LSP also has some of the best one-liners from any movie, ever. â€œBecause heâ€™s so fucking good looking, thatâ€™s why!â€ â€œI was getting tired of booze anyway. Letâ€™s get high!â€ â€œEl Creepo seems to have vanished into thin air.â€ â€œWhat is this, stereo telephones?â€ â€œGod I need a fucking valium!â€ â€œOh Linda, donâ€™t be so QUEER!â€ And one of my favorite things is how they reuse the SAME shot of the killer walking towards the camera with knife in hand throughout the entire movie! Talk about getting more bang for your buck. And make sure to look out for â€œfinal girlâ€ Chris. She is one of the most entertaining characters I have ever seen in a movie, even if she does look like she did a little too much nose candy.

If you like hilariously bad movies, actors making asses of themselves on screen, psycho killers in scrubs, homophobia, nightmares within nightmares, and getting high because you got tired of booze, I recommend that you watch The Last Slumber Party. Itâ€™ll blow your mind. Itâ€™ll turn your world upside-down! And let me remind you: while you watch LSP, â€œdonâ€™t whack it too hard. You can get hair on your palms if you do it too much!â€

Three glamorous high school girls end up being stalked by a psychotic mental patient during an all night slumber party.

This is a very underrated film. The film has two storylines that intersect at perfect times. We begin by seeing the killer menacing a girl at her home before being scared away when she screams for help. After that terrifying sequence we are taken to the school where we meet the students in the gifted class. As they are learning about anatomy, they are also looking forward to the end of school. Three girls in the class, Linda, Tracy, and Chris decide to have a slumber party at Lindaâ€™s house. They also have the three jocks who want to crash the party for their own brand of â€œfunâ€.

The second storyline involves Lindaâ€™s father who has a very violent patient who once tried to make out with him in the hospital room before they were separated. The patient obviously doesnâ€™t take too well to rejection and heads out to the doctorâ€™s home to murder him and his family. This seems to work out perfectly for him as he has a house full of victims at the slumber party.

The slumber party itself doesnâ€™t turn out to be much fun. How can it be when Lindaâ€™s mother is home? She pops up occasionally in case we as the audience forget that she is there. The jocks show up from time to time to scare the girls but the party really gets going when the mental patient shows up. And if that isnâ€™t good enough we also have another killer show up the same night to kill the teens as well. How many movies can say that??

The terror mounts higher and higher until the climactic battle with the final girl and the killer. And our final girl is extremely clever as she investigates the house for her missing friends and even ignores two dying victims just to save her own ass. Hey, this is survival of the fittest! She does what she has to do! She also knows that the worst thing you can do when a killer is the house is to run outside. You must stay indoors and walk around.

I wonâ€™t spoil the ending except to say that some of the so called plot holes could be easily explained when you take the ending into consideration. Overall, a marvelous piece of cinema that deserves a wider audience!

Okay, so this review is obviously being done tongue planted firmly in cheek. But this seriously is a really fun movie that should be seen. It is hilarious! Much love from me!

“You’re invited to a party … the Last Slumber Party … where the girls are dying for a good time.”

From United Entertainment/VCI (Haven’t heard of them? Don’t worry, neither has 99% of the general population) who gave us the awful home video ultra-no budget hit “Blood Lake”, comes “The Last Slumber Party”. On their last day of high school, Linda, Tracy and Chris celebrate by having a slumber party at Linda’s house. A few boys drop by and the beer flows like wine. Just good, clean, fun-loving kids. But the girls have another visitor, one they don’t yet know about. Hiding in the house is a homicidal maniac who has just escaped from a mental hospital. Armed with a scalpel, the nut slashes a little here, a little there as he sneaks from room to room. One by one the guests start disappearing. What evil lurks there? What nightmare world have they entered?
The plot is twisted inside out, leaving you stunned and clinging to your chair as you witness shock after horrifying shock. The ending will leave you breathless. Umm….sure.

There are bad movies and then there is “The Last Slumber Party”. The film looks like it was made for about $20, features “actors” that wouldn’t be able to get extra roles in community theater, and has the audacity to be neither gory OR show nudity. The film claims it was made in 1988 but looks like it was probably filmed in 1982 or 1983 tops. The film looks wretched, shots go on and on to the point of boredom, and the sound switches from not being able to hear a damn thing to shouting in your ear. Sound like your cup of tea? Well dig in and enjoy the bad horror movie you are soaking in.