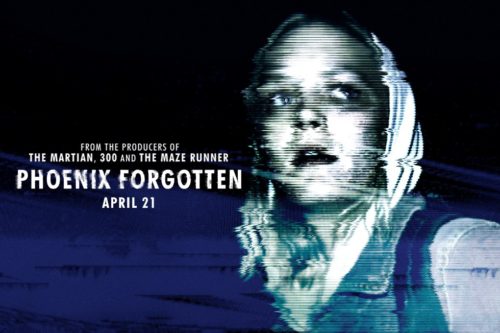 A young woman goes back to her hometown of Phoenix, AZ in order to conduct a documentary involving the disappearance of her older brother and his friends when she was just a kid. She ultimately uncovers the shocking truth and what the government doesnâ€™t want revealed.

This latest found footage horror film goes back to the roots of the found footage we actually enjoy, the mockumentary subgenre that was enlightened by The Blair Witch Project. And the inspiration of that film is clearly inspired here. The film primarily takes place in present day with our lead Sophie. We see her conducting interviews with her parents and other citizens of the town about the legendary â€œPhoenix lightsâ€ that did in fact happen back on March 13, 1997. A mysterious set of lights formed in the shape of a â€œvâ€ hovered over Phoenix and then disappeared, leaving citizens baffled. Some say it was military, some say it was aliens. Sophieâ€™s (who was six at the time) brother Josh is hell-bent on finding out more about these lights. He then enlists the help of his crush Ashley and his best friend Mark to make this happen. As mentioned, the first half of the film is Sophieâ€™s interviews with people about that night and the disappearances. Between this are intercuts of Joshâ€™s footage. When Sophie thinks sheâ€™s reached a dead end, some new and shocking footage falls into her lap. The last half is that footage.

What I appreciated most about this movie is that it is clearly trying to set itself apart from the basic found footage films that get spewed out constantly. The structure and editing of the film works in its favor to make it appear more as a documentary film instead of found footage. The first half involving Sophie seeking answers is slow-moving, but it works to build it all up to our final footage. And I think the wait is worth it. Essentially it moves at the same pace as The Blair Witch Project, especially when it comes to the last half of the film. There arenâ€™t any jump scares in this movie, but it uses the scares of the unknown to screw with your mind until it all goes crazy in the end. And I gotta say I was really tensed up when all hell breaks loose at the end. And this is executed really well because of how little we actually see. We get enough glimpses of the occurrences to shock us and it doesnâ€™t linger on them, and it seeks to use sound more than anything. In some ways though it bares a little too much to Blair Witch in terms of how events go down. I donâ€™t want to make this sound like a huge flaw, because itâ€™s not, but it is hard to not make those mental notes in your head. The intensity of the filmâ€™s ending is great and a solid pay-off, but I was let down because thatâ€™s where it chose to end. I was expecting it to cut back to the present for at least little more time with Sophie, but it didnâ€™t. This was a huge missed opportunity because I really liked where it was headed when Sophie found this last footage. In terms of character though, I really liked Sophie and the trio of friends in the footage and actually cared for them. The trio had good chemistry together, but their general performances I felt were really lacking.

Needless to say, I was massively impressed with Phoenix Forgotten. The creators knew that found footage has grown really stale and formulaic. Not to say this one doesnâ€™t have its moments, but they recognized what made The Blair Witch Project so great and scary, and they hard-core applied it here. And it works. Found footage horror these days comes off as extremely fake, but what this and Blair Witch did is seek to make you think what youâ€™re watching is real. Even if you know itâ€™s not. Everything here feels authentic and itâ€™s not out for jump scares, itâ€™s out to psychologically freak you out and provide intensity. I was let-down of where it ended, and the similarities to Blair Witch very much linger, but Phoenix Forgotten is the approach I wish found footage horror would take by looking back on Blair Witch and using it as inspiration in how to really make these film scary.