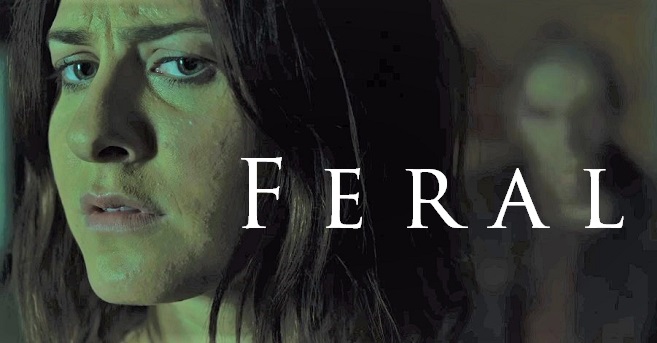 A group of friends take a break from their med school studies to go camping in the woods. When one of the friends gets attacked by what appears to be an animal, they learn it is actually a virus that turns those affected into animal-like beings with a taste for flesh.

Feralâ€™s story isnâ€™t entirely the most original story, but itâ€™s still a fun creature feature in the woods horror film. One of the major focuses of the story is that our lead is in her own moral dilemma about not wanting to kill any of her friends infected, believing they can be cured. At time this can be a bit frustrating when it becomes pretty clear thereâ€™s no saving some of these people and despite be told several times thereâ€™s no cure by the lonely hermit they meet. For me personally, one of the filmâ€™s biggest weaknesses is that it does start up the events too soon resulting in some massive under-development between the characters. The character that gets attacked spends basically the whole movie unconscious, others get killed off right when certain character dynamics are being established and confronted. The biggest issue arises between the lead and her girlfriend. Itâ€™s shown that the lead, Alice, is facing trouble with her father with her newfound sexuality, but it only slightly establishes this and how it affects the relationship, let alone the fact that after a while you forget the two characters are even dating. The lead herself is actually really bad ass and takes action whenever and however she can. As far as the creatures, the creatures are really well done, although they can really resemble the Crawlers from The Descent quite a bit in not just appearance but behavior.

The performances in this film are decent for the most part. Scout Taylor-Compton turns in a strong performance as Alice and perfectly captures the characterâ€™s tough and bad ass side while also showing her care for her friends, and while I wish we would have gotten more of these scenes, she does great in the scenes where we do get glimpses of Aliceâ€™s weaknesses. Olivia Luccardi stars as Aliceâ€™s girlfriend Jules. She also does very well in this role, but she also doesnâ€™t get entirely much to do, but in the scenes where she basically has to be Aliceâ€™s conscience and the one holding her together, she does well. Lew Temple does a fine job in his role as the hermit who knows a thing or two about the virus, what he does well is leaving us guessing whether to see him as a crazed villain or the smartest person in the movie.

Feral is most certainly flawed, especially in terms of character development, but it succeeds in being a fun creature feature with a strong performance by Scout Taylor-Compton.