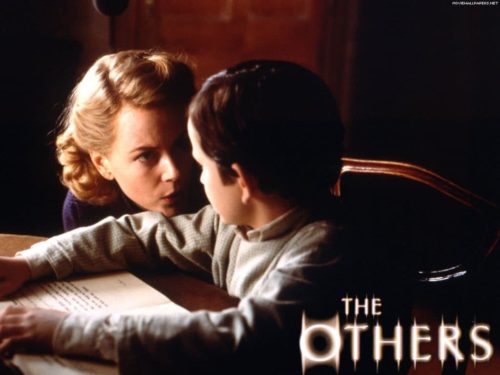 I have seen The Others (“O” of #AtoZHorror in August) and to be honest with you, I was expecting a whole different film by the look of it. I liked the story, the performances, the costumes and the location and house it was shot. The movie was in most parts a slow burn, I can forgive that, it obviously needed some time to set up the story and characters.

What I didn’t quite understand is why at some scenes this movie took so long… Especially in the middle part, I mean if they had made it more suspenseful or remotely boring it would have been a great way of using screen time. Instead, there is more talking and less frights. Nicole Kidman pulled off a superb performance in The Others, and actually all the actors did their job great. The direction and cinematography was also very rich and well taken care of. I also liked the score, it was interesting to hear. This movie had a few suspenseful bits that were well crafted, I wasn’t scared in my pants or anything but I liked this sudden atmosphere it had going on. There was this sudden twist ending that I wouldn’t have seen coming from miles away.

Did I like it? Not sure… It became too much for me, it was sure unexpected but they could’ve done a bit more to make it a bit more scary rather than leave it as it is. I mean the entire build up for this pay off? It deserved better… Still its a well made movie that you should watch at least once. Its really well acted, has an interesting story and is very richly detailed, wish I liked it more than I did.