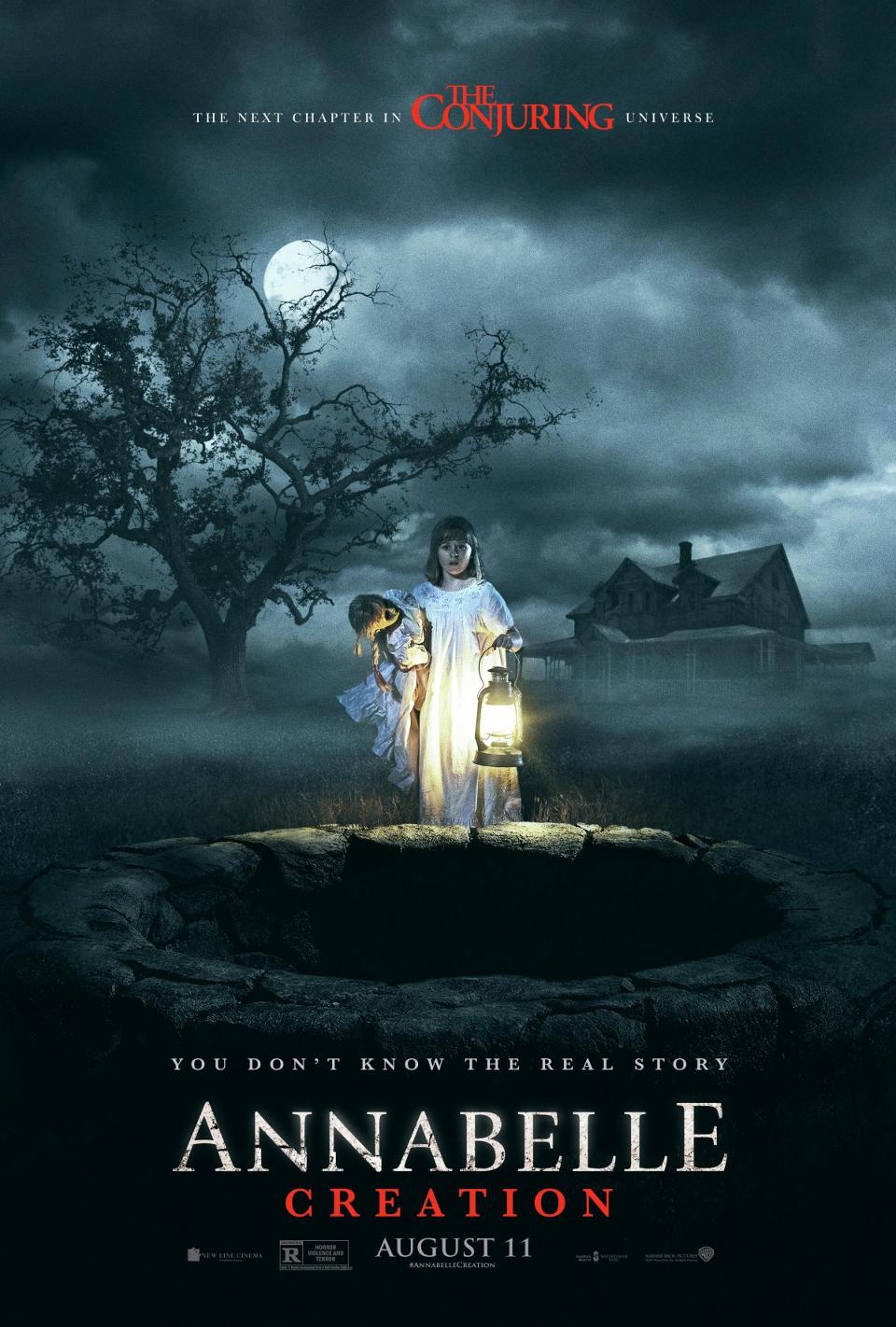 Set 12 years prior to the first Annabelle film, this prequel of a prequel tells the story of the Mullinsâ€™ (Anthony LaPaglia and Miranda Otto) who open their home to a small girlâ€™s school after the death of the daughter Annabelle. Sister Charlotte (Stephanie Sigman) moves into the house with the girls. While residing there, friends Janice (Talitha Bateman) and Linda (Lulu Wilson) come across the infamous doll and realize a darkness is also residing in the Mullinsâ€™ household.

I was one of the many people who didnâ€™t like the first Annabelle film at all. So when this prequel to the prequel was announced, needless to say my expectations were low. Yet when David F. Sandberg, who directed the excellent 2016 horror film Lights Out was directing this film, I was trying to be a little hopeful. Sandbergâ€™s delivered once again. Annabelle: Creation is one hell of a horror film that scares and delivers and engaging and well-written story. We are given some very likable leads in Sister Charlotte as the adult who actually cares about the children and isnâ€™t quick to dismiss claims of the paranormal, but trying remain logical at the same time. Sigmanâ€™s performance as Charlotte is solid and endearing and really makes us care for the character. Lulu Wilson made her outstanding breakthrough performance in last yearâ€™s Ouija: Origin of Evil and returns here with another solid performance. While she doesnâ€™t have as great of lengths to reach unlike her performance in Ouija, she still really sells it as the young girl worried about her best friendâ€™s well-being and willing to put herself in danger in order to save her. Wilson has great on-screen charm with her â€œcute kidâ€ moments, and she also has terrific scenes and chemistry with newcomer Talitha Bateman as Janice. Where Wilson had her breakthrough in Ouija, Bateman has her great breakthrough here. Like Wilson, Bateman also provides a really charming performance and provides a lot of likability to the character. But it is during her â€œcreepy kidâ€ scenes that she knocks it out of the park.

When she gets into that mode, itâ€™s genuinely scary. Itâ€™s not your usual creepy child performance, but itâ€™s more like sheâ€™s trying to play a psychotic character, and Bateman does this extremely well. There are other actresses who star as the other girls who provide pretty serviceable performance and get a decent amount of screen time. As far as LaPaglia and Otto, they donâ€™t get too much to do other than be the mysterious couple, but in the opening act they do a great job of being the caring parents who love their daughter, but they do a great job of showing their grief and their fear in the latter part of the film. Annabelle: Creation does an excellent job of building up our setting and characters to where we become familiar with the characters and care for them, and building up the house and land we become trapped with them in. This most especially is strongest when it comes to the friendship of the two girls and Sister Charlotteâ€™s bond with them all. This is extremely important when the terror sets in, because when it does, you really fear for these characters. And let me tell you, the terror is top-notch here. The intensity is perfectly built up to where my heart was pounding for much of the film. An example of this is how Annabelle the doll is used. I was so unaffected by this in the first film and in some instances even in The Conjuring. But here, Sandberg sets up his scenes involving the dolls so well that when the doll is used and how itâ€™s captured is extremely chilling. One scene in particular is a character being attacked off-screen as the camera focuses and pans in on the dollâ€™s face, this scene gave me chills from head-to-toe. There are other examples where the doll was very well-used as well. In terms of jump scares, sure there are a couple of typical ones, but all of the good ones are perfectly executed and well-times to make them extremely effective. Finally, it seems that Sandberg learned from his audience from Lights Out that less is more. And much of that is right here. Many believed the demon was shown too much in Lights Out. I wasnâ€™t too bothered by this, but I can agree with that statement. But here, the demon, and much of a lot of scary moments are shown very little, and still manage to terrify you.

As far as itâ€™s connection to the Conjuring universe, it does connect to the first film, and in a way I was very pleased with. And it also has a couple of teases to the other upcoming â€œConjuring universeâ€ film The Nun. Itâ€™s worth noting that there is a small mid-credit nod, as well as a post credit tease. Now Iâ€™m sure some will say Iâ€™m over-praising this movie, and may not like it as much as me, but I thought Annabelle: Creation is that rare horror film that succeeds in telling a story with engaging characters, and one that is actually really scary. All of this without cheap jump scares, but instead uses a perfect build-up in tension and well-orchestrated and timed scares. Only 3 other movies have effectively scared me on a physical level, 2 of which were mentioned in this review. Annabelle: Creation just became 4th on that list.