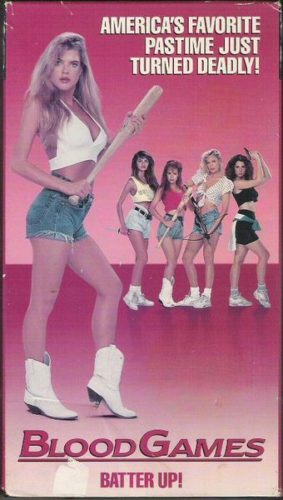 A barnstorming baseball team of buxom blondes and brunettes picks the wrong bunch of hillbillies to embarrass on the diamond in Blood Games. When the girls of Babe and the Ballgirls beat the rednecks at baseball (in spite of excessive groping on the basepaths) white trash blood is boiling. Then, two of the rednecks assault two of the ballplayers in an alley and itâ€™s a war between mercenary rednecks and hot 80s ladies. Itâ€™s like Hooters tried to remake the movie Deliverance at a rec league softball game.

Blood Games sports plenty of B-Movie moments, but it also manages to be watchable – bordering on enjoyable. Itâ€™s paced like a surprised college studentâ€™s dorm room tour: fast and upbeat so you donâ€™t have time to notice how sloppy things have gotten. The music rejects subtlety for sappy sentimentality and ominous droning, and somehow it keeps the whole hot mess on the tracks.

The real joy of Blood Games comes from the bizarre and garish exploitation moments horror fans sift through countless boring movies to discover. Between the credits, fright fans get to see a sexy brunette blow-drying her breasts underneath her bra. They enjoy watching a drunken redneck poking at a balloon while urinating. The pixie-ish ballplayer stopping to admire a butterfly before an arrow pins her to a tree. George â€œBuckâ€ Flower, a John Carpenter regular, wearing a â€œThe Check Is In The Mailâ€ trucker hat and begging the showering ballplayers to be careful of his bad arm and his bad neck.

The biggest flaw in Blood Games is the unnecessarily eroticized sexual violence. The battles between ballplayers and slack-jawed hillbillies are played for fun and laughs. On the two occasions where sexual violence becomes very real, it throws the movie into an uncomfortable distraction that neither improves the intensity of the fighting nor adds depth and understanding to the reality of sexual violence.

Squint your way past those scenes, and youâ€™ll love Blood Games. Hot girls, baseball bats, hooting hillbillies, and the importance of having a strong throwing arm.