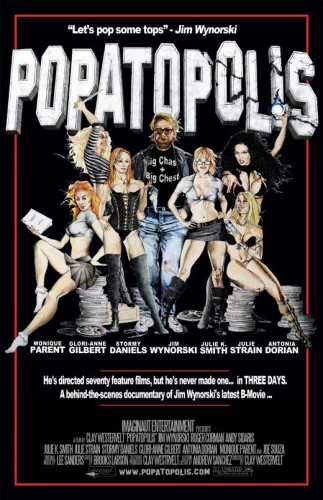 Love is a difficult thing to describe, but describing a love of B-movies and bad films may be impossible. Popatopolis documents Jim Wynorskiâ€™s method of making movies with the same measured honesty that Best Worst Movie documents Troll 2. It paints Wynorski as a perennial underdog who somehow makes bad movies profitable. His excitement is loud and infectious, even when his behavior seems petty or even misogynistic.

Jim Wynorskiâ€™s page on the Internet Movie Database is filled with low-budget films from over 25 years of directing. Most horror fans have seen at least one Wynorski film. Heâ€™s known for tiny budgets, scantily clad women, and gimmicks galore. Popatopolis follows the three day production of Wynorskiâ€™s film The Witches of Breastwick. The documentary offers glimpses into Wynorskiâ€™s career and personal life, including a very revealing interview with his mother. It also offers a platform for Wynorski and the cast and crew of Witches of Breastwick to try to explain exactly why Jim makes the films he does.

Popatopolis offers an unsentimental view of low-budget filmmaking. Flashlights are a cheap substitute for fireside lighting. Second takes cost too much time and money. Towels are non-existent at the filming location, and actors have to make due with two washcloths.

So who is Jim Wynorski? At the end of the day, heâ€™s a director who finds a way to make low-budget films that compete, in a very limited way, against blockbuster films with much larger budgets. He relies on sex, gimmicks, and cost-cutting to stay profitable.

In Popatopolis, Wynorski ends up a hero for making films no one defends for their artistic merit. Every rushed shot, gratuitous nude scene, and stock-footage gimmick is an attempt to tease the audience with something they arenâ€™t getting from Hollywood films, even if his movies sometimes donâ€™t always fulfill that promise.

Early in the movie, Wynorski is talking on a telephone and describing the documentary as the crew films him. He says he doesnâ€™t think theyâ€™ll make any money on it. After 25 years, he clearly has found ways of being profitable with less cash. Popatopolis shows how he does that. In its more sentimental moments, it even suggests what he might have done if he had aspired to more than turning a quick profit.