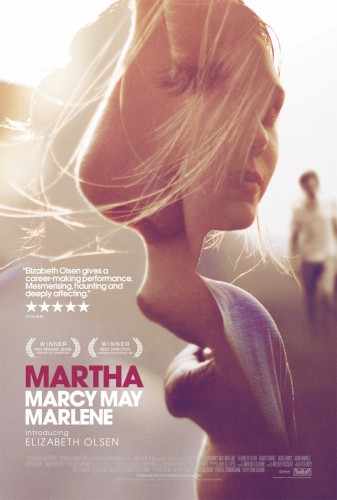 Since I started this site a year ago, I have made it my mission to only review slasher films for this site. I mean this site is called Slasher Studios after all and if I started to review other horror films, the site might lose its focus. Well, today I am about to break that rule. Today I am reviewing what I believe to be the best film of 2011. It is neither a slasher film nor is it a traditional horror film but it is a film that will stay with you long after many films have come and gone. The movie in question? The beautifully hypnotic “Martha Mercy May Marlene.”

The film begins with the self destructive Martha (in a brilliant, one-of-a-kind performance by the beautiful Elisabeth Olsen) has run away from an abusive hippie-like cult where she was living as Marcy May for two years. She turns to her sister (nicely played in an understated performance by the always great Sarah Paulson) and brother-in-law who take her in and want to help her. The problem is Martha is having a hard time separating dreams from reality and when haunting memories of her past keep resurfacing, she may need more help than anyone is able to give her.

I try to go into as much detail as possible when I am doing my plot summaries but this is the rare case when I honestly believe that less is indeed more. This is exactly the type of movie where you will get everything that you put into it. Want a Hollywood type thriller in which all the plot threads are nicely tied up at the end? This is not the movie for you. All I can say is that the harsh realities of this film combined with some of the most lush and lurid cinematography add up to a film that I won’t soon forget. The fact that Elisabeth Olsen wasn’t nominated by the Academy this year is one of the grossest oversights in modern day cinema. There is power here. Let it take you and you may be surprised by just how much this film truly moves you.

To order on Amazon: Martha Marcy May Marlene