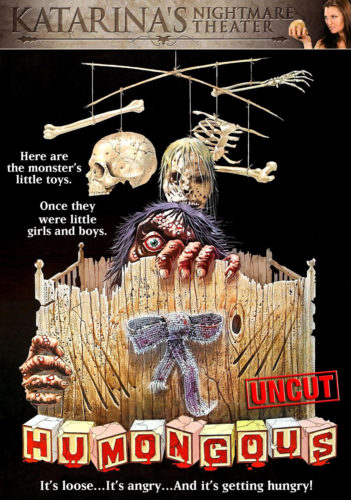 Like all great horror movies, today’s overlooked 80’s slasher “Humongous” begins on a holiday. It is Labor Day weekend, 1946. Young, virginal Ida Parsons innocuously plays with her German Shepherds as her father hosts a raucous party inside their small island cabin. Amid the festivities, an older, drunken man named Tom Rice staggers outside and propositions Ida. When she refuses, he chases her into the woods and brutally rapes her; her dogs, hearing her muffled cries for help, break out of their pen and track her down in the woods, where they attack and fatally maul Ida’s rapist. As Tom lies dying, Ida beats him to death with a log.

The movie then picks up in present day (well…1982). Preppy brothers Eric and Nick are borrowing their father’s yacht to take their girlfriends, Sandy and Donna, on a weekend outing along with their sister, Carla. At the outset of the trip, Nick demonstrates his intent to be the “alpha male” of the trip, insisting that he be the one to pilot the yacht and at one point pulling a gun on Eric to demonstrate his authority. As the tensions rise between Nick and Eric, Donna and Carla engage in girl-talk, and geeky Carla silently laments that she is the sole member of the cruise who came along without a significant other.

That night, fog settles in; Eric and Nick, hearing cries out on the water, discover and rescue a shipwrecked fisherman named Bert. Bert informs them that he wrecked offshore Dog Island, the home of lumber baroness Ida Parsons, who has used her family fortune to hole herself up on the island for the past thirty-five years; now she only makes two annual voyages onto the mainland for necessary supplies, and has never spoken to anyone during these trips. Recovering from the onset of hypothermia, Bert tells the quintet a campfire story about the savagery of the wild dogs which roam Ida’s island, acting as her sentries. The story, coupled with the cries of wild animals coming from the nearby island, startle Nick enough that he runs on top of the yacht and tries to speed back to the mainland; instead, he wrecks it, damaging the fuel line and causing it to explode. Little do they know that once they get to the island, their problems have only begun.

“Humongous” is a fun, homage filled 80’s slasher that rips off a dozen other, better slasher films but still manages to be a lot of fun. Remember the scene at the end of “Friday the 13th Part 2” where Amy Steel pretends to be Jason’s mother? This film sure does as the exact scene is repeated here to lesser effect. That being said, the kills are fun and characters are a tad bit better developed than most of the other 80’s slashers out there. David Wallace is particular is quite strong as our lead twin Eric. Most of the time in 80’s slasher, guys are given nothing to do but not so here. He almost becomes the film girl by being smart, likable, and even given a chance to emote. Lead Janet Julian possesses similar qualities and has a lot of fun with her “last girl standing” appearance. This is a must watch for fans of the early 80’s slasher genre. I can’t say that everyone is going to enjoy the film as much as I did as the film is quite slow and repetitive at times. Nonetheless, it is one of the better examples from the under-appreciated genre.