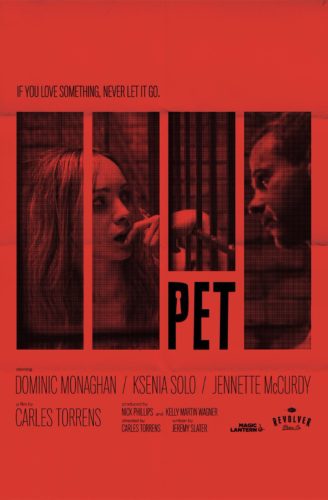 A man runs into a girl from his past that he used to have a crush on. At first she thinks heâ€™s harmless, but he soon grows to become really obsessive. Eventually he kidnaps her and locks in her a cage beneath the pet shelter he works at. However, the man soon begins to realize that the woman may be harboring a secret that can help her escape.

Pet is the definition of psychological thriller. Throughout the film itâ€™s a constant a mind game between the two characters. The film starts out as a stalker film, but eventually it switches gears and become a COMPLETELY different movie entirely. For the most part, the movie takes place in one location, and it uses its one location very well. This is due to the fact that you are so focused on the two characters and the growing tension that you almost forget that this girl in a cage for much of the movie and that theyâ€™re both in this Saw-like room in a basement. While the major twist is revealed fairly soon into the movie, itâ€™s still shocking but it keeps you gripped throughout the film to see what happens next. It also throughout the film that we gradually get more and more information and background of these characters. Initially one will think that there is no development whatsoever, but thereâ€™s plenty of filler in the middle. The film has elements of Hard Candy and Silence of the Lambs; both extremely well-done psychological films, and this film lives up to both of them (although it wonâ€™t be as acclaimed or remembered as those two). Some moments seem to drag a little bit, but right before you are about to tune out, something screwed up happens. The writing by Jeremy Slater is solid, and Carles Torrens provides great directions to keep us engaged and wrapped up with these two characters and their setting.

Dominic Monaghan makes a great comeback since his performance on the show Lost and shares great on-screen teamwork with Ksenia Solo who play off of each other extremely well. Both actors do an amazing job of presenting the different layers to these characters and the change in personas as the film progresses. Jennette McCurdy turns in a fine enough performance in the short time sheâ€™s in it. Sheâ€™s the logical best friend to Ksenia Soloâ€™s character who basically tries to get her to see reason. McCurdy provides some sassy and often dark moments really well, and itâ€™s a shame sheâ€™s not in it as much.

Pet is probably the best psychological film Iâ€™ve seen in a while and I highly recommend to everyone loves films like this, or the two films mentioned above, and seeing two very solid performers playing off each other in very intense ways.