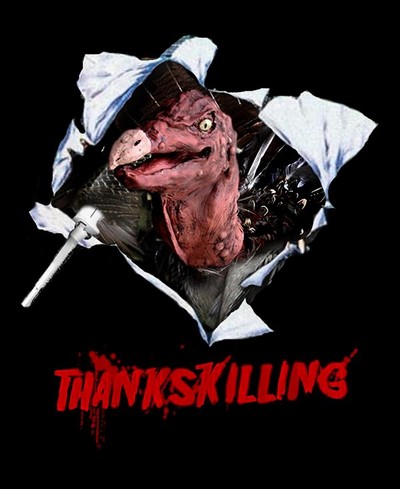 I decided to watch ThanksKilling (2009) and do a review, which is proving to be somewhat of a frustration for me. There’s little more I can say about this movie other than I found it to be nothing too much more than an ugly, stupid movie. I admire it a little for how much I hate it, only because it’s most likely everything it was intended to be.

The opening shot in this movie is a boob, and the first line right before the first death in the movie is, “Nice tits, bitch,” which surely received a lot of positive responses. I can understand, as it’s a purely tasteless and highly respected quality for an opening scene for a film such as this.

My reaction to the opening scene was only to rub my tired old eyes and sigh.

The movie is only 70 minutes long (it took me three days to watch) and consists of college kids on holiday break being chased by a killer turkey. It’s a typical college movie kid lineup- the jock, the slut, the nerd, the “cool funny” kid, and the final girl.

Did I mention it took me three days to watch? I just don’t think that it’s entertaining enough for how shocking and mean-spirited it is. I’ve seen a lot of grotesque and offensive horror that I can respect and enjoy far more, just because it either had a point to it, or it was fun and entertaining. This movie does none of those for me. The shock, the gore, and the humor- all which are normally great elements to a fun horror movie- were all very tiresome and I felt that a lot of it was just unnecessary added-on junk to something already very junky.

I apologize to those who disagree with how unlovable I found this movie. Some of you who haven’t seen it might really enjoy it, and by all means, have fun with it! I sincerely hope you at least appreciate it more than I did.