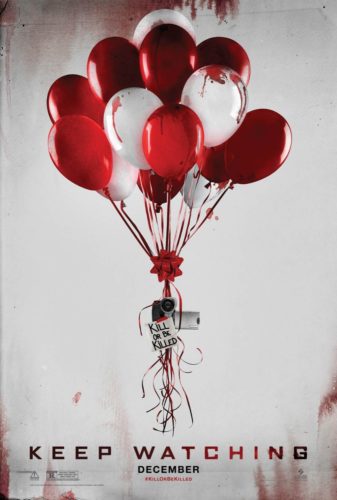 A family falls victim to a home invasion, they eventually realize that they are part of a twisted came thatâ€™s being recorded for people to watch live. Now they must fight to survive the game.

After taking 3 years to be released, Sony and Screen Gems released Keep Watching for one night only theatrically, on Halloween with one showing at 10 pm. This is how I viewed the film. And to my surprise, I didnâ€™t find it that bad. It was a pretty entertaining film, but thatâ€™s about it. The movie is basically a combination of The Strangers, Saw, The Hunger Games, and Vacancy. The family at the center of it are being watched and preyed upon by masked strangers and while trapped in the house and the terror being recorded, the family is given â€œgiftsâ€. These gifts can either help them in fighting back, or lead them to their doom. For the most part this had some pretty good intense scenes going for it, and you actually care about the family. Theyâ€™re pretty likable and not as annoying as most families in horror films are. Could they have been developed a little bit more? Definitely. But you get a decent enough feel of them to at least not deem them annoying and you canâ€™t wait for them to die.

Admittedly it is essentially a pretty generic home invasion film with its predictable moments, and the moments where the characters make questionable decisions. However, the concept of the killers allowing their victims play this slasher game with the ability to fight back gives it points for being at least a little different. When it comes to them filming the mayhem, you do have to question how the hell the police arenâ€™t seeing this or at least someone is reporting it. And while itâ€™s actually really well-filmed with some of the camera techniques they used, I think they overdid it with just how many cameras the killers placed throughout the house, and most especially where they hid them. Yes, the entire film is viewed through hidden cameras. I think had they made it both hidden cameras and regular format it would have fared better. Overall, it is a pretty cool concept that helps the film be different than your average home invasion horror film. The acting is pretty well done all around. Bella Thorne genuinely surprised me in this one, she showed a decent amount of range that makes me wonder just what the hell sheâ€™s been doing turning in horrible performances in her other films that didnâ€™t involve her being the idiot bitchy girl.

Keep Watching has a decent amount of flaws, and itâ€™s not exactly scary, but itâ€™s a different and entertaining take on the found footage genre that I recommend. It at least should have gotten more than 1 night showing, it deserves that much at least.