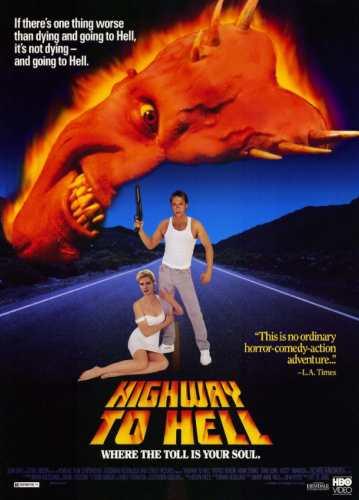 Charlie Sykes (Chad Lowe) and Rachel Clark (Kristy Swanson) are a young all-American couple that decide to run away and elope in Las Vegas. On the road to Vegas, they ignore the warning of a local gas station attendant named Sam (Richard Farnsworth). They take an abandoned backroad where Rachel is kidnapped by a Zombie Hell Cop (C. J. Graham) who takes her to hell. Charlie goes back to Sam, and Sam explains what the Hellcop is and how to save her, he then gives him a shotgun with special ammo, and a car that holds a special attribute. On the highway, Charlie meets other dead people that live in Hell and even a motorcycle gang. On the road, he meets a mechanic named Beezle (Patrick Bergin), with his young apprentice. Beezle gives him tips on how to save his girlfriend and even brings him back to life. After Charlie rescues Rachel, Beezle reveals himself to be Satan and proposes a deal to let them, and his apprentice, go free if they can defeat Hell Cop in a race to the portal that connects Earth and the backroads of Hell.

“Highway to Hell” is one of the strangest horror comedies that I have seen in a long, long time. Nothing really makes sense and the script seems thrown together at the last moment but it is all part of the charm of this low budget gem. My favorite part? Hell’s “Good Intentions Paving Company”, which crushes up and spits out people into cement who offer excuses like â€œI just slept with the boss so he could get a promotionâ€ or justifications for pulling the plug on life-support machines. Witty stuff all around. The movie seems a bit long in the tooth (even at only 93 minutes it seems to take forever to get to hell) but there is an energy and enthusiasm that isn’t normally seen in early 90’s horror. “Highway to Hell” is available on Netflix instant and is a solid way to kill an hour and a half.