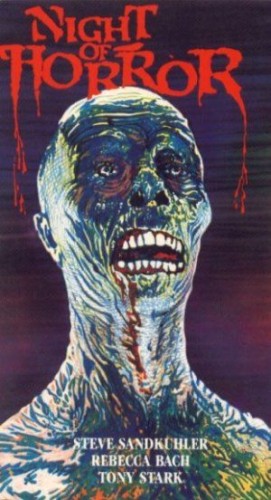 I see the term “worst horror movie ever” thrown around a lot online and I am usually shocked when I see the movies that are being referred to. Most of them I adore! Night of Horror is one that I can’t say I enjoyed. It commits the ultimate sin of being unbelievably boring.

The movie concerns a group of four adults heading out for a trip. They end up having some mysterious RV trouble and find themselves stranded in the middle of nowhere. Okay, there’s the plot. There’s really nothing else to the plot other than that. This is going to be a horrible review because there’s not enough here to actually review. The first 10 minutes feature two guys sitting in a bar (actually looks more like a basement) chatting. The camera is sitting on a tripod. There’s no other camera angles or close ups at all. The sound is really difficult to hear. After the long opening sequence, our hero joins up with his friend and two other women and they get into their RV and head out. On the way our hero flirts with one of the women and she proceeds to read an entire short story to him on camera.

We are treated to what feels like 10 to 15 minutes of watching the RV drive down various roads. There’s also a piece of black tape on the camera lens that is on there for a good bulk of the movie. How did the filmmakers not notice this? Our happy foursome finally end up stranded in the woods and are confronted by some civil war ghosts. Cut to 10 to 15 minutes of stock war footage. Finally, after that “Night of Horror”, the group reunite some old bones or something and head home.

There you go. Worst movie ever made because nothing happens for the full running time. It took me several tries to stay awake through the entire thing. But I did finally manage it. Still, I don’t regret seeing it. Since I do consider it the worst movie ever made there is something to say for actually seeing it. Watch at your own risk!