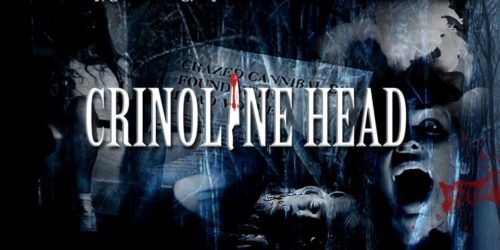 In 1995, a little slasher called Crinoline Head was released and developed a cult following among some slasher fans. It wasn’t until last year that I heard of this slasher. A friend of mine sent me the trailer on Facebook and I instantly HAD to check it out. The movie itself did not disappoint. It was filled with the sort of over-the-top humor and deliciously campy bad acting that the 1980’s were well known for. The film played out like a mix of Friday the 13th and Sleepaway Camp while using the best parts of both horror franchises. It became THE movie that I had to show all of my friends. They ate it up as well.

Nearly as soon as I watched the original Crinoline Head, I heard word through the grapevine that a sequel was in place. We even chatted with the director (Tommy Faircloth) and lead actor (Jason Vail) on an episode of Slasher Studios Horror Podcast. The sequel was going to be bigger and better than anything in the original film and I couldn’t wait to devour every bite. After having been contacted by the director on Facebook with the chance to watch an online screener, I instantly jumped at the opportunity. Does the film live up to my lofty expectations or does is Crinoline Head one horror villain that should have stayed in the 1990’s?

In the first film, a group of vacationing college students rent out a cabin on the lake where they find some mysterious dolls and learn the legend of Crinoline Head. It should come as no surprise to horror fans that they were killed off one-by-one until there were only two remaining. The sequel takes place 18 years later as we follow one of the survivors of the first film, Paul (played by Jason Vail in a nicely nuanced performance) who is now a professor at a local community college. When a few of his students decide to do a report on the local legend of Crinoline Head and the untold story of Dorchester Stewart, he tries to let go of the past but…can the past let go of him?

Among the students along for the ride we have the typical group of slasher meat: the jocks, the slutty girl, the good girl, etc. But, believe me, it’s all part of the fun. What follows is a glossy slasher that almost works better as a stand alone than it does as a sequel to the original Crinoline Head. Whereas the original had some great homage moments (the Sleepaway Camp 2 death comes to mind), the sequel takes another approach and handles the material extremely seriously. Turns out, that’s exactly what it needed. That’s not to say there isn’t a fair amount of comedy. In fact, the always awesome Debbie Rochon plays a country bumpkin that comes across as the daughter that Ethel (Friday the 13th Part V: A New Beginning) never had. She’s uproarious in her brief screen time and proves that you don’t have to have a large role to make a big impact on a slasher fan.

As the friends start to pile up, the mystery starts to take hold and….well, you’ll just have to see for yourself. Bravo to Mr. Faircloth for creating a thoroughly entertaining and extremely polished slasher sequel that features some great deaths, a fantastic little Carrie homage, and some likable (as well as “love to unlike”) characters in a tight 95 minute running time. Keep an eye out on this one. Don’t be surprised if this ends up being one of the best indie slashers of the year.