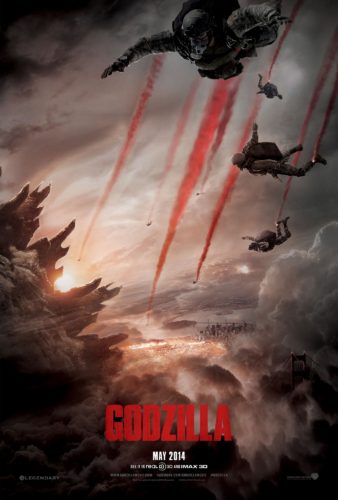 Following the blockbuster (but also the highly slammed) 1998 film by Roland Emmerich, the big, scaly monster we all know and love is back. This time helmed by director Gareth Edwards. When I first saw the trailers for this film, I was immediately transported back to childhood when I saw the 1998 film and how excited I was watching it. It also helped that it was being backed by a talented cast. However, after finally seeing this 2014 summer blockbuster, my excitement was shot. The ads portraying him as the villain could not be more misleading. The film starts out with a backstory of Godzilla, as well as our two leads. Flashing forward we come back to these two characters as well as Ken Watanabe and Sally Hawkins as two scientists who have been studying the creature’s history as well as new species they’ve been keeping under wraps. From that point on I found myself anxiously waiting for the big guy’s big entrance (no pun intended).

Instead, I was treated to a military, family drama where the first creatures to make their appearance are two Mutos, which bare a resemblance to Cloverfield monster…with wings. It isn’t until almost a good hour and fifteen minutes into the film that Godzilla finally comes into the picture, and even then, we don’t seem to get a full scene with him until the last twenty minutes where all of the action takes place. What really downgrades the film is that the title character has less screen time than any of the main actors in the film. Even the Mutos have more screen time. There is zero action in the film until the big battle between Godzilla and the Mutos. Everything before that is slow paced drama involving the military running around carrying guns, and the scientists discussing what must be done. And since when has Godzilla become a hero instead of an enemy? I will say that the special effects were really well-done and provided a good visual treat.

While the film features a very talented cast, they have very little to work with. Aaron Taylor-Johnson stars as our lead character who is trying to do whatever it takes to fight these creatures and protect his family. Bryan Cranston stars as Taylor-Johnson’s father who is digging into the past order to save the present. The two actors work well together in their scenes and both could have provided excellent performances, but this all to blame on the weak characters they were given with no real emotional depth. Elizabeth Olsen, who plays Taylor-Johnson’s nurse wife in the film is the only member of cast who tries to go above and beyond with her role by at least trying to give her some depth as the worried wife and mother. Ken Wantanbe and Sally Hawkins provide the weaker performances by sleep walking through their roles. During what should have been some pretty dramatic moments, they act like it doesn’t phase them at all.

It feels horrible to tear into a film that was so well-marketed and that I anticipated. But when a poor script completely destroys a title character, as well as the human characters, more than the creatures destroyed the cities in the film, it has to be said, this version of Godzilla will leave hardcore fans of the big lizard mighty disappointed. However, the talented cast trying to work with what they’ve got, the effects, and the ultimate final battle are definitely something to give it credit for.