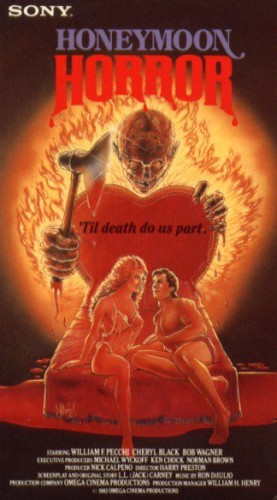 I know a lot people aren’t going to agree with me here, but I’m going to speak up in the defense of this little guy, because I genuinely love this film.

One year after her husband is burned to death in a fire after discovering his wife’s infidelity, Elaine Carlton and her new husband Vic re-open their honeymooners paradise island which was devastated by the fire. Three newly-wed couples arrive looking for peace, quiet and sex, but everyone on the island is in for something far more frightening. Someone else is stalking the wooded island, someone horribly burned with vengeance in mind…
This film can be classified as just one of the droves of slasher films that were released in the wake of Halloween, and that generalisation is accurate. In all fairness Honeymoon Horror isn’t the best film, but it’s FAR from the bad film people have painted it out to be, sure it pales in comparison to Carpenter’s classic, but looks damn Oscar worthy when compared to the likes of cheapo messes like Sledgehammer (1983) or Spine (1987).

Two things in particular stand out in this film and make it more than worthwhile. First is the location, the isolated, wooded island is an absolute dream of a horror movie location. Shrouded in shadows and entirely cut off from civilization, it helps lend a heavy sense of dread and foreboding to a film that lacks in other areas, this elevates it and gives it a certain gloss, something missing from similar films.

Next I must commend this film for taking it’s time, it dares to pace it’s killings in between long stretches of story, and this in turn leads to a final act that is high in atmosphere and dread as our principals cower in a house, terrified of the killer lurking outside. Sure, the performances in this film are questionable and the editing is choppy, but trust me, Honeymoon Horror is much better than some of the slasher tripe making more money at the time. It’s location, pacing and atmosphere do volumes for it and elevate it a level, please seek it out, you could do so much worse!

Side note: This film was also the first film to be released direct to video without a theatrical run, RELEASED to video, not shot on video. It made upwards of 22 million dollars for Sony Video on a mere fifty thousand dollar budget…I implore you, see it!