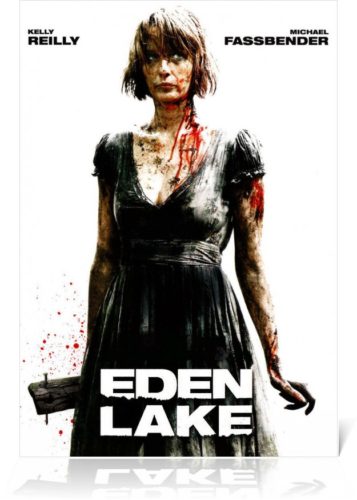 So to start off, EDEN LAKE isn’t your typical horror slasher movie. Eden Lake goes where other mainstream Engilsh horror movies will stop.

Story
Eden lake is about a man and a woman who are going to a lake in the woods to camp there and have a romantic time. They get picked on by a group of teenagers but nothing serious is happening. Some time later the picking on gets worse and the teenagers do the harshest things from stealing till torturing. No spoilers, but the woman gets badass.

Scary and Gory?
These are important factors for horror slasher movies. So is it scary? It isn’t like supernatural movie scary A.K.A jumpscares. This movie is intense the whole time, you can say that due to the intensity it is pretty scary. So is it gory? This movie isn’t as gory as movies like ichi the killer or as bloody as the evil dead (2013), so it is not the whole time squirts of blood etc. However, when this movie is gory, it is pretty realistic and rancid.

The movie itself
But how good is the movie itself, acting, music, directing etc? The acting in this movie is pretty good and realistic, I loved Kelly Reilly because she did such a good job. The music in this movie was okay. The music was good but there are movies where the music really helps with the scariness factor but that wasn’t the case with this movie. The directing really surprised me because it is directed by James Watkins who made the woman in black and I didn’t really like that movie. However, in this movie the directing of him was really good and I hope he will make more movies like this in the future.

Conclusion
This movie was just amazing and it was pretty original for an not foreign horror movie. Everything worked for me. The gore and scaryness were amazing and I think that every horror fan would love that. However, I do think that you have to like movies like the last house on the left (2009) or I spit on your grave (2010) because this movie is pretty raw and not for the weak stomach or weak mind.