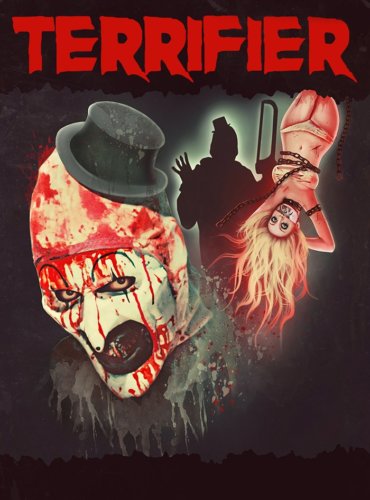 A psychotic serial killer dresses as a clown and pursues three young women on Halloween. They find themselves trapped inside of a run-down building where the clown known as Art resides.

Terrifier is the feature-length film based off the character seen in the anthology film All Hallows Eve, the director of the latter returns to direct Terrifier. The first half of the film is an extremely solid and actually pretty damn scary horror film. We are introduced to two young women returning from a party that decide to ease their drunkeness with some pizza before allowing themselves to drive. Prior to they come across Art the Clown in an alley and the blonde friend, Dawn, decides to mock him, while the very alert friend, Tara, feels very uneasy. While trying to enjoy their pizza, Art has followed them and stares menacingly at them. From there on out, it becomes a very stalk and slash film when we are ultimately introduced to Taraâ€™s bookworm sister, Vicky. Much of the films gives very heavy vibes of Halloween and Scream in how it chooses to pursue to the stalk and slash formula. And this works just as well as those two classics. It also helps that Art the Clown is downright terrifying (I would honestly say more so than Pennywise), and really itâ€™s thanks to David Howard Thornton who does an amazing job playing the psychotic clown, along with the excellent make-up work. Art is just as terrifying taunting his victims as he is when heâ€™s being all-out psychotic. As mentioned, the first half is super intense, not just with Art doing his thing, but because of how well certain scenes are done in general. Thereâ€™s a chase scene in a garage (similar to Paris Hiltonâ€™s chase in House of Wax), that is extremely intense.

As far as characters, Tara is extremely likable as the lead, and Jenna Kanell does a great job with the role, and while Dawn is supposed to be the obnoxious and idiot friend, I couldnâ€™t help but enjoy her character that Catherine Corcoran clearly had a blast playing. Samantha Scaffidi does well enough as Victoria, but the only problem with her is that she just doesnâ€™t have much to do. Sheâ€™s introduced studying for an exam and has to go pick up Tara and Dawn, and thatâ€™s all we get from her. About halfway through the film is when we get a mid-point twist that didnâ€™t really work at all for me. Had this been more warranted and had more foreshadowing or development, I would have been more okay with it. Not only this, but it is during this left half that I felt the film lost its momentum and started becoming a bit more silly than scary. This isnâ€™t to say itâ€™s still not enjoyable, but that the first half was clearly more inventive. I donâ€™t know if this is because everything before the mid-point twist was more engaging and established, but something did feel a bit more lacking in the latter half. One thing that may be hit or miss with viewers is the kill and gore. This film is gory as hell and the gore looks great and is pretty brutal, but that could be its downfall in that some may find the movie turning into more of a torture porn film. I can understand this viewpoint, but I wasnâ€™t personally bothered too much by all of the gore.

For a low budget slasher film, Terrifier is an extremely solid movie. We have some great kills, an excellent first half with a couple of fun characters and good performances, and more than anything we have an extremely terrifying (I swear all of these uses of â€œterrifyingâ€ are no pun intended) killer. This film is a blast and despite the issues with the last half and mid twist that I had, I would still highly recommend this movie.