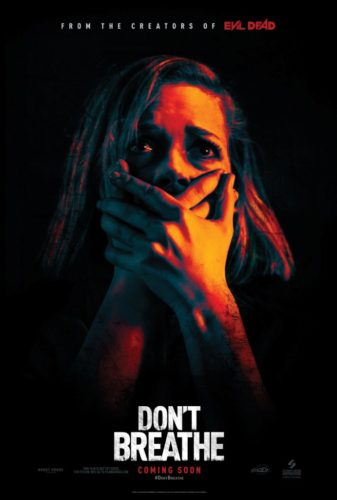 A trio of young burglars decide to break into the home of a blind war veteran after hearing he fell into a load of money. They think that this will be an easy task, and use it as an opportunity to escape their lives and move on. However, they soon find out that they may have broken into the wrong house.

Fede Alvarez, the director of the very well-praised remake of Evil Dead, returns to bring in more terror. I will be straightforward and say this movie genuinely scared the hell out of me and made me feel like I was on the verge of a heart attack. There were moments when I was putting my hands over my mouth, to my head, covering eyes/ears, etc. By the end of the movie I was shaking. This is the same sensation I felt when I viewed the aforementioned Evil Dead in the theater. Now, I wonâ€™t say this is scary to the point where Iâ€™ll have nightmares or never see a horror movie again, but in terms of experience. This is one film that NEEDS to be seen in the right environment. Especially in the theater if possible. The movie features so much intensity and doesnâ€™t use cheap jump scares (well maybe once before the events even start), and not super loud music to scare you. It is the definition of suspense, it keeps you on edge, not knowing what is going to happen. You genuinely feel like youâ€™re in the same position as the characters in certain scenarios, and you find yourself wanting to yell â€œNO! Donâ€™t do that!â€ etc. A lot of the suspense is brought on by the fantastic direction by Fede Alvarez. He had such an amazing vision for the film, the camera shots, the lighting, and just the entire focus on the setting and the characters. The story itself is a wild ride. There are times where you think you know whatâ€™s going to happen and something happens completely out of left field, or just when you think all is over, you get pulled back in. In a sense, when things get going in the story, you can hardly ever catch your breath. On top of the strong script, we have some likable enough characters, considering their crimes. They work almost as different characters of our psyche. The id, the ego, and super-ego. We have the impulsive and deranged one who thinks heâ€™s indestructible, the one who tries to find reason for their doings, and the one who tires to convince the other two to do the most sensible responses. Maybe Iâ€™m overthinking this last part, but it fits perfectly.

Finally we have our small cast in Jane Levy as Rocky (the â€œegoâ€ and our leading lady) who delivers another terrific performance after her breakout role in Evil Dead. Levy shows just as much range as she did in Evil Dead, she shows fear brilliantly and provides genuine heart and care in the right moments. Fresh from the live-action Goosebumps film is Dylan Minnette as Alex (the â€œsuper egoâ€ main guy) who is clearly in love with Rocky and is easily the major heart and logical one of the film. Minnette showed great potential in Goosebumps, and shows it even more than ever that he can definitely be an excellent leading male. He starts out as the shy character, but he does gradually rise into a strong character, but not in the sense of complete unrealistic change. Both sides he shows realistically and never makes it over-the-top. Daniel Zovatto (the â€œidâ€) plays the bad boy well to the point where you donâ€™t know whether you like him or not. Finally we have Stephen Lang as the Blind Man. If you thought he was a great villain in Avatar, he is incredible in this. Much of his performance is just from a physical performance, with little dialogue until the final act. Itâ€™s a rare feat when someone can be terrifying by only being physical and no dialogue (without wearing a mask or disguise of some sort).

Donâ€™t Breathe is evidence that Fede Alvarez is one hell of a horror director. He knows how to psychologically mess with your mind. While Evil Dead was more in your face, Donâ€™t Breathe works the senses to its maximum potential. With his brilliant direction, as well as his strong well-structured script with Rodo Sayagues, and solid performances from its cast, Donâ€™t Breathe is one horror film you donâ€™t want to hold your breath onâ€¦at least until while viewing it.