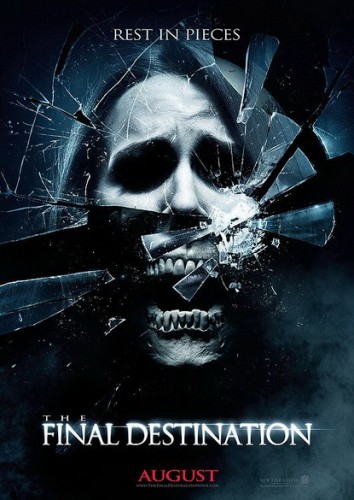 When it comes to bad movies, I really can’t think of too many that are just terrible movies period because I find most movies enjoyable so I am going to go with a movie that can be considered “so bad, it’s good”.

The plot is simple because every film overall in the franchise has the same idea about “Death” going after, and killing each person off who survived a terrible accident in the beginning, and you have the “lead” character in every film who could could see when “Death” was around and how a person was going to die. But this film opens with a Race-car track accident, and some survivors making it out alive till “Death” comes after them.

“The Final Destination” was released in August 2009, which was the same weekend that “Rob Zombie’s Halloween 2” came out as well. Of course I passed on “The Final Destination” to see “Halloween 2”, and I was happy I waited till I got the film on Blu-ray because overall it is a mess of a film, and the weakest film in the franchise. I feel that this film just missed what the other films brought in so many ways. First, I dislike a lot of these characters in this film ,besides the lead actor and lead actress, because you really don’t care for any of them, and when they meet their deaths you really don’t feel sorry for them. Second, the script is just a mess because this film really doesn’t focus on story and just focuses on the deaths. Even when you are leading up to someone’s death, it just tries to hard to make the audience think on how this person is going to die.

The story is weak, and I just feel overall the story was a mess. Third, when it comes to the kills in the film they aren’t too special. The opening scene, and one death involving an escalator are the only ones I really like. Fourth, the director is one of my problems because he did a great job with “Final Destination 2” then he went on to direct this weak film in the franchise. At times, it just felt like he didn’t care about the film compared to Part 2. Now, there are a lot of reasons why “The Final Destination” is a mess. But besides that, I have it on Blu-ray, and it is a fun “popcorn flick”. It’s enjoyable, and fun to watch. But in the end, it’s nothing special. In 2011, I was so happy with “Final Destination 5”, and I am so happy they went with a fresh director, writers, crew, and story. Now that is a perfect way to end the series.

“The Final Destination” begins with a car race in McKinley Speedway, twenty-something Nick has a premonition of a deadly car crash with many casualties in the audience and convinces his girlfriend Lori and his friends Hunt and Janet to leave the place. They are followed by the security guard; a racist guy; a mother with her children and a mechanic, that are saved from death. When the racist guy and the mother die in mysterious and creepy incidents, Nick and Lori research and find many similar cases in Internet. They try to lure The Ripper to break the chain of deadly events and survive, but destiny does not help them. Stop me if you’ve heard this before…

“The Final Destination” was supposed to be the least in the ever profitable “Final Destination” series. Well, as soon as New Line saw the cash registers ringing, another installment was quickly put into production. The film itself is one of the dumbest horror movies to ever get national release. At barely 82 minutes, its hardly even a movie. The film plays out like a collection of “best of” deaths that you might find in the $5 bin at Wal-Mart. It’s a collection of been there, done that situations in which the actors don’t have names, they have death orders. I can just see the production team now, “Body #18, you are needed on set now!” It’s all just really, really stupid. But, and this is a huge but for a lot of slasher fans, it somehow all works. It’s less serious than the disappointing “Final Destination 3” and the actors seem to be having a good time with their meager parts. I know a lot of slasher fans hate this sequel but I had a good time. Go in with low expections and maybe you’ll have a bloody blast as well.