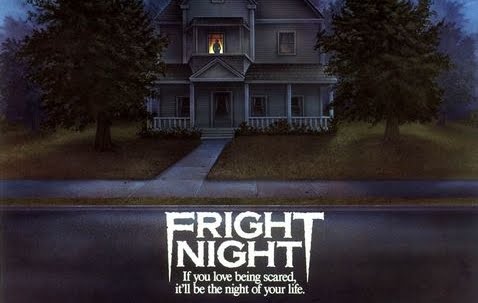 Charley Brewster (William Ragsdale) is a huge fan of traditional Gothic horror films. He stays up late at night to watch the horror movie TV series “Fright Night” hosted by Hammer Horror style actor, Peter Vincent, who played a vampire killer for many years in horror movies. Charley discovers that his new next door neighbor, Jerry Dandridge (Chris Sarandon) is a vampire. Upon coming to this terrible realization, Charley tries to tell his naturally skeptical yet loving mother, and asks his friends for their help. In desperation he calls the police but when he reveals his suspicions to them they believe he has a wild imagination and ignore his claims. That night Charley gets a visit from Jerry himself who offers Charley a “choice” (something he claims he lacks) to look the other way about him. Charley can’t bear the idea of people being killed to feed this monster so he tries to use his cross only for Jerry to stop him. Jerry then tries to throw Charley out of the window and nearly succeeds until Charley stabs him in his hand with a pencil. In rage and retaliation Jerry destroys Charley’s car.

Charley turns to his vampire-hunting hero, actor Peter Vincent (Roddy McDowall) for help, but Vincent dismisses Charley as an obsessed fan. Charley’s girlfriend, Amy Peterson (Amanda Bearse), fears for Charley’s sanity and safety so she hires the financially-desperate Vincent to “prove” that Jerry is not a vampire by having him ingest what they claim is “holy water” but it turns out to only be tap water. Peter Vincent accidentally discovers (in a truly frightening scene) Jerry’s true nature after glancing his lack of a reflection in his pocket mirror, which causes him to accidentally drop and smash the mirror. With this new, terrifying information, Peter flees but Jerry learns of Peter’s discovery after finding a piece of his pocket mirror on the floor. Will Peter Vincent and Charley Brewster be able to save the town from Jerry before it is too late?

“Fright Night” is quite possibly the best vampire movie that I have ever seen. The mood, the setting, the atmosphere…everything in this movie works. From beginning to end, this film reeks of dread and, more so, the 1980’s. I don’t mean that to be a smack in this movies face, I truly mean that as the ultimate compliment. If one were to make a time capsule of the movies that embodied each decade, this movie, along with “Heathers”, would have to be near the top of my list for movies to include. There is not a single damn thing that I don’t like about this movie. “Fright Night” made vampires scary, erotic, and fun. Compare this to “Twilight” and you will see there is no comparison.