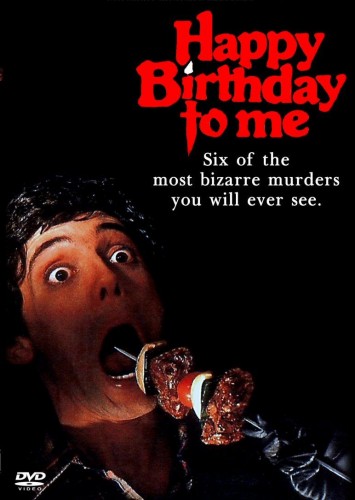 The first thing that comes in my mind when I think of Happy Birthday to me, is the first scene where a girl is being killed on her way to a pub where her college friends waiting for her. I was a very young boy when I first saw this film and since then it’s on my top 10 list of horror films.

Virginia Wainwright is not a typical girl of her age. She lost her mother in an accident and lives in a very luxury house with her wealthy father since then. She and her friends do all the crazy stuff that college boys and girls do but what they don’t know is that there is a killer on the loose. As the plot of the film is in process we become aware of some details from Virginia’s past and the impact of her mother’s death on her. Meanwhile, one by one all of her friends start disappearing without leaving a trace. Virginia starts feeling that there is a connection between her and her friends disappearances because her mind plays mysterious and malice games. She and her psychiatrist try to find the missing parts of her past in order to understand not only what is going on with her but if there is any league to her friends deaths as well.

A strange and unusual 80’s flick that doesn’t use the typical recipe of a horror film. What we have here is a very strong script with very interesting twists. The acting is rather good even though Melissa sue Anderson (Virginia) overdone it sometimes. I won’t be a spoiler for those who haven’t seen it yet, but the ending is very interesting and different from what we’re used of. So, enjoy 1:45 minutes of absolute suspense.

Virginia “Ginny” Wainwright is a pretty and popular high school senior at Crawford Academy. She is one of her school’s “Top Ten”: an elite clique which comprises the richest, most popular and most snobbish teens at the Academy. The Top Ten meet every night at the Silent Woman Tavern, a pub near Crawford’s campus. One night, en route to the Silent Woman, Top Ten member Bernadette O’Hara is attacked in her car by a killer whose face cannot be seen. Unable to flee, she struggles and then plays dead to catch the Killer off-guard. She fights the killer off, then runs off to get help. Instead, Bernadette finds a student whom she is familiar with. She pleads her ordeal, only to have her throat slit when this student (whom the audience still cannot see) turns out to be the killer.

The Top Ten is briefly concerned when Bernadette fails to show up at the Silent Woman. They promptly get over it, however; the Top Ten have a long history of playing elaborate pranks, both on each other and on the locals. Their grievance with another tavern patron inspires them to pull such a prank: they “borrow” the member’s pet mouse, which they dunk into the lodger’s beer, all the while pretending to apologize for their rudeness. The lodger discovers the mouse; mayhem ensues, and the Top Ten flee the scene.

En route back home, the Top Ten see a drawbridge going up and decide to play a game of chicken: all cars in the game must make it across before the bridge is completely raised (to allow the passing of ferrys). A protesting Ginny is shoved into a car by fellow Top Ten member Ann Thomerson. Every car jumps the drawbridge save one. After the car stops Ginny runs from the vehicle into the darkness home. On the way home she stops by her mother’s grave to tell her she’s popular and hangs out with the Top Ten all the time. Ginny is confronted by her father about coming home after her curfew. Unbeknownst to either of them, somebody has followed her home. Will she be able to save her self or her friends before they fall prey to the top 10 curse?

“Happy Birthday to Me” is preposterous, over-the-top, and silly. A blend of all of the 80’s excesses rolled into one far too long film (outside of the “Scream franchise” NO horror movie should run upwards of two hours). Nonetheless, “Birthday” works. Maybe it is the silly deaths (gotta love the shish-ka-bob to the mouth or the weights to the crotch) or maybe its the outlandish ending that doesn’t even try to make any sense whatsoever. Whatever it is, this movie put a blood red smile across my face for the majority of its running time. Great atmosphere, steady cinematography, and a capable cast also help matters considerably. I can’t say this is a great movie by any stretch of the imagination but if you are looking for a fine, fun 80’s slasher, this is definitely one of the better ones.