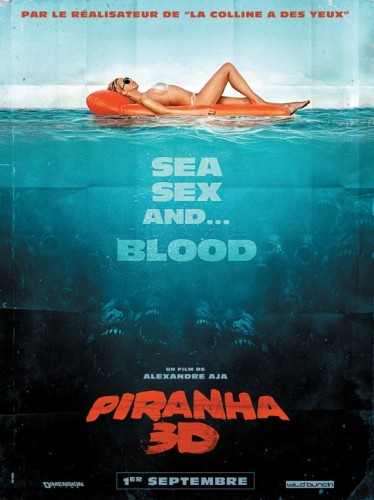 One of the biggest problems a filmmaker can encounter in the horror-comedy subgenre is being ahead of the material. It is one thing to have a knowing, sly attitude towards your material but having a “Hey guys! This is really funny! You should laugh…NOW!” attitude is the death wish for horror-comedies. It is quite possibly the hardest subgenre of horror to perfect. If your film is too funny, it will no longer be scary. Let’s be honest, who wants to see a horror movie that isn’t scary? Not me. It’s the entire point of the genre. If your film is too scary and not funny enough, people may forget the laughs or, worst case scenario, think that the laughs are unintentional. Will all of this in mind, I’m ready to take a stab at Alexandre Aja’s 2010 horror-comedy hit, the blood bath Piranha. Does it deliver the bloody goods or should it be left in the ocean like a bloody, piranha infested corpse?

Piranha begins with a lonely Matthew Boyd (a wickedly funny cameo by Jaws alumni Richard Dreyfuss) fishing in beautiful Lake Victoria, Arizona when a small earthquake hits, splitting the lake floor and causing a whirlpool. Boyd falls in and is ripped apart by a school of piranhas that emerge from the chasm and ascend the vortex as we head into our bloody opening credits. So far, so gory.

We meet Jake Forester (a charming Steven R. McQueen who looks ready for his part in the next Final Destination) as he is admiring attractive tourists as spring break begins. He reunites with his old crush, Kelly (Jessica Szohr) and meets Derrick Jones (Jerry O’Connell), an eccentric pornographer, as well as Danni (the beautiful and utterly charming Kelly Brook), one of his actresses. Derrick convinces Jake to show him good spots on the lake for filming a Girls Gone Wild style knockoff.

That night, Jake’s mother, Sheriff Julie Forester (an enthusiastic slumming Elisabeth Shue), searches for the missing Matthew Boyd with Deputy Fallon (a way over-the-top Ving Rhames). They find his mutilated body and contemplate closing the lake, however this is made difficult by two thousand partying college students on spring break who are important for bringing revenue to the small town. The next morning, a lone cliff diver is attacked and consumed by the marauding fish.

Jake bribes his sister and brother, Laura (Brooklynn Proulx) and Zane (Sage Ryan), to stay home alone so that he can show Derrick around the lake. After Jake leaves, Zane drafts Laura to go fishing on a small sandbar island. They forget to tie the boat down and are stranded in the middle of the lake. Meanwhile, Jake goes to meet with Derrick and runs into Kelly, who invites herself onto Derrickâ€™s boat, The Barracuda. Jake meets Crystal (Riley Steele), another of Derrickâ€™s actresses, and cameraman Drew (Paul Scheer).

Julie takes a team of seismologist divers â€” Novak (Adam Scott), Sam (Ricardo Chavira), and Paula (Dina Meyer) â€” to the fissure. Novak speculates that the rift leads to a buried prehistoric lake. Kendra and Sam scuba dive to the bottom and discover a large cavern filled with large piranha egg stocks. Both are killed by the piranhas before they can alert the others to the discovery. Novak and Julie find Kendra’s corpse and pull it onto the boat, capturing a lone piranha, which they take to Carl Goodman (a hilariously funny cameo by the one and only Christopher Lloyd), a marine biologist who works as a pet store owner. He explains that the piranha that they caught is a prehistoric species, long believed to be extinct, which must have been trapped underground for over two million years where they have grown super-aggressive after having had to resort to cannibalism in order to survive. Will the crew survive the night or end up as Piranha bait?

Piranha is the type of B-flick that Hollywood simply doesn’t make anymore. Lots of nudity and tons of gore delivered with style and grace by Aja. This is the rare bad movie that knows it is a bad movie and simply has fun with it. Is the cast and crew slumming? Sure but they are having a blast with it and I had a blast watching them create the ultimate B-movie for this generation. The gore is top notch (if there were any justice in the world this film would have been nominated for best makeup effects by the Academy) and the sting-in-the-tail ending left a smile on my face that lasted for hours. This movie is just a blast and I cannot wait for the sequel.

To order from Amazon: Piranha DVD