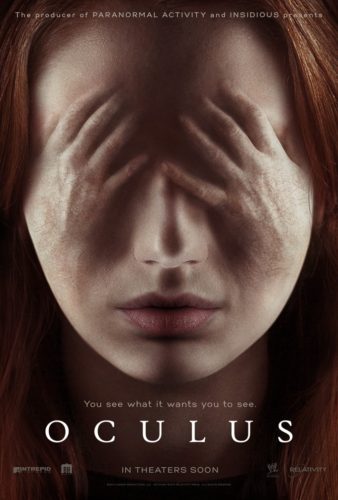 When Tim Russell (Brenton Thwaites) is just released from an institution, his sister Kaylie (Karen Gillan) convinces him to help her fulfill the promise he made to her when they were children. To investigate the mysteries deaths of several people, including their own parents revolving around a mysterious mirror. Together the two siblings must confront the past in order to destroy the mirror once and for all.

Oculus is a story that is told through many flashbacks to the two leadsâ€™ childhood, cutting back to the present. While normally flashbacks can work when done right. But when the flashbacks take place through the entire movie every ten minutes, it quickly begins to get tiring. The film suffers exactly this. It works in the final act, but not throughout everything prior to that. As I watched the film, I quickly found myself growing bored between the cuts between the past and the present. Especially when nothing was happening during either. We get strange occurrences in the flashbacks, but nothing truly frightening. In the present itâ€™s nothing but the siblings talking. However, when the final act occurs, this is when things begin to pick up, and makes everything before that worth the wait. While everything before that was void of tension and scares, the final act provides a great deal of it, all leading to one shocker of an ending. As the final act approaches, the film does a fine job of making you second guess what is happening just as the characters in the film do.

One of the filmâ€™s strongest aspects is the acting. Thwaites and Gillan provide great performances as the two lead siblings. The chemistry between them is present, but not as strong as it could have been. However, they both provide great performances on their own. Gillan does a great job of showing a woman with great determination, but is also growing slowly unhinged as the film progresses. Thwaites does just as great of a job as the younger brother trying to forget everything that happened in their childhood and wanting to think logically, but when things begin to escalate you can see the panic begin to arise in him and the damage of the past returning.

Oculus could have been a top-notch and perfect slow burner of a film, had the flashbacks been condensed into one and have it all lead to the perfectly solid final act. While it wonâ€™t go down as one of the best supernatural horror films ever, itâ€™s one worth checking out. Despite the boring majority of the film, the solid acting by the two leads help carry the movie to itâ€™s solid final destination.