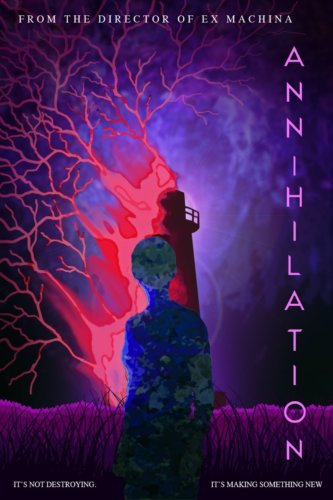 After her husband returns after being missing for a year, Lena sees something has changed in him. She now seeks to find out the truth. Eventually she is grouped with other highly intelligent females who seeks to know what secrets lie within The Shimmer, a mysterious force that has been gradually spreading and only growing larger. The group eventually come to realize the truth may not be as concrete as they expected.

Alex Garland brings us one of the most-blowing films of recent years. He so perfectly wrote and directed this film with a lot of thought in mind, and on top of that he mixes genres so well in it. The movie balances elements of drama, horror, and science fiction all in one. One scene as far as horror goes, is easily one of the most intense scenes I’ve experienced, and one towards the end is just as intense, but it’s a scene unlike anything you’ve seen in horror before. As far as drama and sci-fi, it brings forth a story that is extremely thought-provoking in how it has some really dramatic and poetic ideas, but at the same time it’s also a pretty horrific way of showing it. This is not the full-on horror film that the full trailer makes it out to be. When in actuality it goes so much deeper than that. It’s not a physical or even psychological horror film in the traditional sense, but it’s one that uses doses of horror to bring forth a more cerebral and thought-provoking horror. But if I’m being honest, this movie is pretty hard to categorize, it’s definitely more geared toward sci-fi, but it’s so complex and has many different layers to it. It does move at a fairly slower pace with only instances of eventful scenes thrown in, but it’s really an exploration film, and we are exploring The Shimmer and what it contains just as much as the characters are, and they are what really drives this film.

The basically all female cast does such an amazing job. Natalie Portman delivers some of her best work yet as the ex-military turned biologist Lena, Jennifer Jason Leigh immerses herself in a character with so much mystery that at first can seem like such a hollow performance, but really she’s channeling such a hollow and closed-off character, Tessa Thompson and Tuva Novotny are also great in their roles, but the biggest surprise comes from Gina Rodriguez who easily as the most to work with in her muli-surfaced character. She’s at first represented as this tough and bad ass chick who’s got everyone’s back, but the further she gets into The Shimmer, the more her character begins to change out of fear and hostility. On top of all of this, we have such amazing and beautiful visuals and cinematography that I can only hope can leave a lasting enough impression to garner Oscar nominations for 2019, as well as the brilliant and often haunting score. This is one film I highly recommend, it may not be full-on horror, but there is horror within its roots and the ideas it brings about.