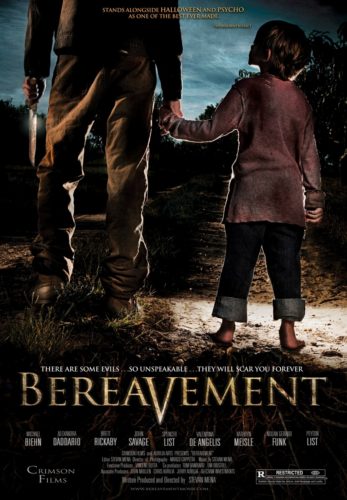 Bereavement is the 3rd film by writer/director Stevan Mena and serves as a prequel to his 2004 debut film Malevolence. Bereavement hit the festival scene in 2010 and got a limited theatrical release in March of 2011. There was a lot of hype surrounding the release of Malevolence and audience reaction to the movie was very mixed; with Malevolence Stevan Mena took to the slasher film back to its roots of the late 70s and early 80s and while the film wasn’t original it stands out since at the time there weren’t many movies like it as everything seemed too Hollywood even in the Indie scene these films were copying Hollywood releases. Bereavement has a lot less hype with its release, but from the fan base Malevolence built up there was still some excitement.

Stevan Mena is a filmmaker who isn’t afraid to stray from the safe film Hollywood always puts out as I stated with Malevolence it may not be the most original, but it features no comedy and it strays from the Scream dominated clones at that time and that sort of makes the movie more original than it actually was and he could have gone for a more mainstream audience and knocked off Scream, but instead, Mena delivers a movie that has more of an 80s slasher feel than actual 80s slasher flicks. Now with Bereavement instead of doing what most filmmakers do and play it safe he makes not only a prequel, but a movie that has a completely different tone than the original. Don’t go into Bereavement expecting a slasher flick since you’ll be disappointed and while the film does have some slasher movie elements, Bereavement is much more of a throwback to the late 70s and early 80s exploitation flicks such as Don’t Go in the House and even a little bit of Maniac. Bereavement is a character study and while there is plenty of action and some gore the movie doesn’t rely on that at all Bereavement is far more driven by the characters. Stevan Mena shows a lot of courage by making a movie so drastically different in style when the easier thing to do would be to simply rehash the first film.

Upon my first viewing of Bereavement I liked it, but didn’t love it and I just felt the movie was average at best. To be honest I’m not really into prequels overall with some exceptions; I think my biggest problem with Bereavement is since I’ve seen Malevolence I sort of knew what would happen with all the characters and thus for me the element of surprise was taken away so I don’t think I allowed myself to fully get into the movie even if I tried. I sort of held off reviewing it or talking much about it since I had a feeling this might be a movie that grows on me and so I decided to sit down and give the movie another try and this time I was fully able to accept the prequel aspect as well as scenes I wasn’t able to the first time around and Bereavement in my opinion is a great film that truly needs to be seen.

The screenplay by Stevan Mena has an interesting idea and gets into more detail on the abduction of 6-year old Martin Bristol (List) and how he’s forced to watch the homicidal acts of Graham Sutter (Rickaby) and with Bereavement Mena goes into deeper detail on how Martin Bristol became the cold-blooded killer he would become in Malevolence and this was an excellent and chilling idea and while it may not have been needed in the sense that Mena explained this in Malevolence even if not in full detail, but yet it still works well when all is said and done. The subplot deals with Allison (Daddario) moving from Chicago to a small Pennsylvania city to live with her uncle after the death of her parents. This aspect of the screenplay was a lot more complex than your typical exploitation flick and Mena works both stories well and the family angle with Allison adds a lot of depth to the movie.

The characters in Bereavement were fairly strong and interesting with some decent depth and like I said that isn’t often seen in these films. The dramatic aspect of the story doesn’t take away from the horror and Mena works both these elements together very well. While Bereavement does feature plenty of action and gruesome violence it’s much more driven by the characters and as I stated Mena’s script works very well and you might even find yourself attached to the characters, which makes the horrific scenes against them even more powerful.

As director Stevan Mena delivers a film that is totally different in tone from Malevolence; whereas that film was a throwback to the 80s slasher and sort of feels like a holdover from the 80s, Bereavement is a much darker and meaner movie; this isn’t a movie you watch for entertainment. Bereavement is a dark film that’s quite tragic and this is the movie where Stevan Mena really arrived as a filmmaker. Between Bereavement and Malevolence it’s difficult for me to say, which film I liked more, but Bereavement is the better made movie and despite the low budget it can hold its own in production values with any Hollywood release.

Stevan Mena delivers some genuine moments of suspense and right from the start of the movie he sets up an eerie and dark tone and always manages to keep the pace of the movie going along. Typically when it comes to sequels and even prequels the filmmaker delivers the same basic movie with some new characters thrown into the mix, but Stevan Mena isn’t afraid to try something different and again Bereavement has a completely different tone than Malevolence and I really appreciate the effort and care put into the movie. As I stated Bereavement is very much a throwback to 70s/80s exploitation flicks and Bereavement is very gritty looking at times and its clear Mena understands the genre.

The pacing of the movie is excellent and like I said before while there are plenty of gory deaths at the end of the day Bereavement is very much driven by its characters, which will turn some people off looking for cheap thrills. Stevan Mena proves with Bereavement he’s more than a capable filmmaker and as long as he keeps getting projects the future is high for him. While many fans hail Rob Zombie or Alexandre Aja as the best of the new generation of horror filmmakers and even though I like both filmmakers in my opinion Stevan Mena is the best of the bunch.

The final act of the movie everything really pays off since you’ve spent so much time with the characters that it makes what happens to them all the more tragic and had Mena just gone for cheap thrills the impact of the final act wouldn’t have worked; without spoiling anything the first person Martin Bristol kills easily for me rates as one of the most tragic scenes. The character was likable and did not in any way deserve such a violent death and for me I thought it was rather heartbreaking and not many movies can strike that emotion out of me, but Stevan Mena really pulled it off.

Overall I found Bereavement to be an excellent and chilling movie that works great as a horror movie and a drama. My original disappointment stems more from seeing Malevolence since enough was explained that I’m not sure a prequel was really needed, but seeing it again I was able to accept things much better and saw how truly amazing of a movie Bereavement is. Stevan Mena has arrived and I can’t wait to see his career unfold; in my opinion Bereavement is one of the very best of 2011 and even though it’s a straight up prequel its strong enough to stand on its own.