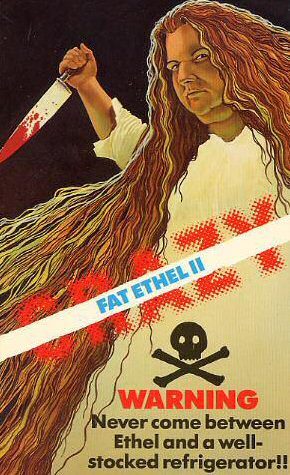 So you made a film fifteen years ago that was so bad it developed a small cult following and now you want to make a sequel but don’t have any money: What do you do? If you are Nick Millard, you purchase a few blank VHS tapes, fire up the trusty camcorder, track down the star of the original film and use tons of the old footage to pad out the running time. Now I don’t mind the random flashback used here and there, but when at least half (maybe as much as three-fourths!) of the run time consists of recycled scenes, then I *do* have a problem. Combine with some of the worst acting ever, next to no blood, “humor” that most 7-year-olds would find too juvenile, sound so shoddy it’s often impossible to hear the dialogue and an unsturdy camera that constantly zooms in and out on the killer’s face as a lazy “flashback” cue and you pretty much have the abomination that is “Crazy Fat Ethel II.”

After being locked up for slaughtering six people, Ethel Janowski (Priscilla Alden) is set free because of budgetary cuts (uh huh) and goes to live in a halfway house. There, she glares at everyone, eats, sleeps, laughs maniacally and meets a few of the nutjobs sharing space with her. One guy murdered his wife for trying to poison him and another nutter thinks he’s an insect and likes to capture flies to put in his soup. Limited meals start to wear on Crazy Fat Ethel and her refusal to take her meds finally sends her over the edge. An orderly who serves the patients dog food and eats a Three Musketeers bar in front of Ethel gets hung. A detective shows up to ask questions and just leaves because Ethel has a foolproof alibi (she was watching an episode of “Gunsmoke” alone in her room). A guy who saw the murder demands Ethel give him her pudding for an entire month. Instead, she stabs him in the back with four different knives and just leave his dead body lying in the kitchen floor. The cop shows up again, says “I might as well set up shop right here!” and leaves without questioning anyone or making any arrests. Idiotic? Yep. Funny? Never.

After bashing the halfway house owner over the head with a candle stick for taking away her pretzels and stabbing a doctor in the back after chasing him around the sofa, Ethel goes outside and dances around for several minutes with a bloody knife. There are many close-ups of feet and legs for some reason. The bloodiest scenes are all stolen from the original and every single second of the new footage is awful, moronic and incredibly boring. Many of the unbroken takes are gruelingly long, including a shot of Ethel eating a pudding cup that lasts for several minutes. Priscilla Alden was funny in the first film (“Criminally Insane”), but is given little to do here and her dialogue truly sucks. This thing was so cheaply spit out that instead of making new credits, they just reused the old ones from the original, nevermind the fact that no one from the original appears in this sequel other than the leading lady. This is one of the only movies I’ve ever seen that doesn’t have a single redeeming quality.

People these days too freely use the phrase “Worst Movie Ever!” to describe disappointing or merely bad films. Those people clearly have not seen “Crazy Fat Ethell II,” for if they did, they’d know the true meaning of the “worst.”