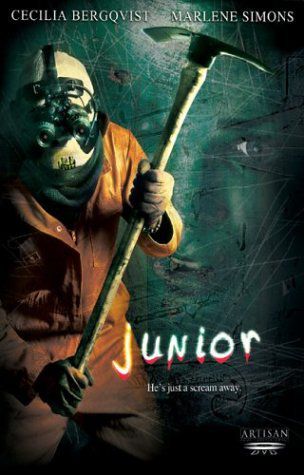 Poor, poor Tim Schilling. Buying horror movie 8 packs from WalMart, you gotta admire his dedication in watching every single one of them. If that isn’t a true horror fan, I don’t know what is. Well, today we have another horror flick from the 8 pack of death. This one is titled “Junior”, will it break the bad movie curse?

Thoughts before the film:
I ain’t got nothin to do, so I’ll try to finish this terrible DVD 8 pack. Next up, ‪#Junior

Thoughts while watching:
0:02 Already regretting watching this.
0:10 I think I paid more for this DVD than what this film’s budget was.
0:15 I’m starting to feel as if this movie is more about their car than anything else.
0:21 Hehe I saw you cameramen shadows.
0:32 Every single one of these actors has an accent coming from who the hell knows where.
0:34 I think the car is the bad guy in this movie.
0:35 I sit down and do nothing when someone is banging on the top of my car too!
0:39 I’d love to see the script for this movie. “The car shakes as it growls at the bimbo”
0:40 Aw, too bad there’s an actual person doing the killings. I was really hoping it was the car.
0:43 “It’s barbecue time, you fuck!”
0:55 (said the name)
1:15 This guy keeps on calling an old lady a slut…
1:19 This guy is so mean to his son, too bad the acting is terrible cause otherwise I’d actually feel bad.
1:25 I’ll just pretend to be your mom, and then light you on fire (again) when you’re not looking.
1:29 Oh please don’t let there be a sequel.

Final Verdict:
If ‪#Junior‬ had a better crew behind it, I think it coulda been a decent movie. The story was good, but I don’t think it was carried out well