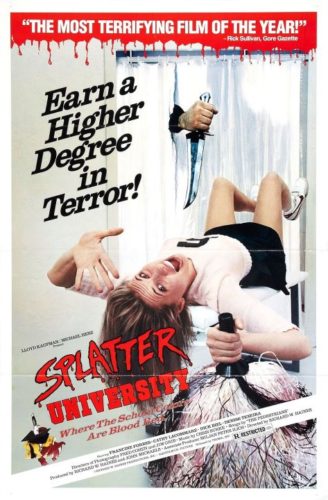 Splatter University (1984) is a no budget 1980’s slasher schlock-fest with some of the most unforgivable acting and special effects that I’ve ever seen, and it’s one of my favorite so-bad-it’s-good horror flicks! A mental patient (we don’t see who it is) kills a staff member and escapes from the loony bin. Three years later a female professor is brutally killed at a Catholic University. The next semester yesterday (yes, that’s what the caption says), there’s a new professor on campus, Julie (Francine Forbes, known now as Forbes Riley), who the movie centers around. Also featured are Julie’s professor boyfriend, the dean of the university, and a pack of asshole students who all scream for a brick to be thrown at their faces.

This college-themed slasher never takes itself too seriously with a subtle sense of humor, but plays it straight with the slashing! Splatter U is filled with POV shots, red herrings, inventive deaths (watch for the bloodless knife-down-the-throat kill), sex-crazed college students, religious undertones, and some of the most outrageous 80’s fashions, all rounded out with an enjoyably cheesy keyboard synth score. 99% of the acting is god-awful, but credit should be given to Francine Forbes who, in my opinion, does a great job playing the protagonist. Her acting may be amateurish but her character is believable and very likeable. Forbes makes it a lot easier to enjoy this movie and her talent really holds the story together among a sea of lifeless, gag-inducing actors. The gore effects may be cheap looking, but the red stuff flows like rivers!

I’ve chatted with the Director Richard W. Haines (also directed Class of Nuke ‘Em High) here on Facebook quite a few times. He has recently deleted his account, but he told me in lengthy detail about the production of Splatter University. He said the original film was only about 60 minutes and mostly featured Francine Forbes, but the studio wanted the film to be longer. So after the initial filming was through, Haines went back and shot a lot more scenes which consisted of all the extremely cheesy scenes with the asshole students, extending the film to 78 minutes. Haines told me that he has intentions of releasing this slasher on blu-ray, and including the original 60 minute version as an extra feature. That version would probably end up being a lot less cheesy that the version we’ve all seen and grown to love.

Splatter U isn’t a good movie by any means, but it’s hokey, fun and hilarious! It has a surprisingly interesting story and an unexpected ending quite different from most slashers. And don’t forget class, at Splatter U the only requirement is SURVIVAL!